You know you are in Utah if

If you guessed 4), congratulations and welcome to Salt Lake City. Home of the Church of Jesus Christ of Latter- Day Saints or the Mormons or the LDS.

After a few days of sin (Las Vegas) and nature (Grand Canyon, Arches National Park), I was looking forward to some people history and in Utah, it is all about the Mormons. I am not particularly religious, having avoided most houses of worship since my teenage years save for the occasional wedding, funeral or Bar Mitzvah, but religion has always interested me in an academic sort of way. I learned about the Buddha in Sri Lanka, early Christianity in Israel and Rome and Hinduism in India. So, when in Salt Lake City, I wanted to indulge in all things Mormon (except the no alcohol bit and the praying part).

Salt Lake City itself is odd. It has a population of about 200,000, but the greater Salt Lake City has in excess of 2 million, none of whom appear to work downtown (except the Mormons) or use the very empty, efficient and air conditioned LRT/streetcar system. I took it downtown on an hot Monday morning (high of 38) and disembarked at Temple Square, the 35 acre complex that comprises the main headquarters and buildings of the LDS.

I entered the South Visitors’ Center, seeking information about tours. A sister (all the women are sisters; all the men are brothers and no unmarried man works in the tour area) with her name and a flag representing her country warmly greeted me and asked what I would like to do. When I said a tour, she pointed me to the flag pole and said the English tour would start in 7 minutes and it was free.

I waited by the flagpole until our two smiling tour guides appeared. Sister C. was from Taiwan and Sister P. was from Myanmar. Both were fulfilling their missions by conducting the tours. Although neither spoke English as a first language, they had a good enough grasp of it to answer questions and follow the script. After brief introductions, they asked if anyone was a Mormon. A middle aged lady with platinum blonde hair responded positively. She had visited the Temple Square before, but this was the first time for her husband.

The Sisters gave us a brief history of the Mormons and the Book of Mormon. About 2200 BC, some people in Israel (not well defined) had grown disenchanted with the local government, so they sailed to America. Again, how this was accomplished was rather vague, but the Sisters rightly pointed out that when they sailed to America in 2200 BC, it was not called America. While here, a number of prophets wrote The Book of Mormon on gold plates. The last prophet was named Moroni. whose father, Mormon, lived in the US about 385 AD and contributed to the plates, hence the name the Book of Mormon. During this period, Jesus Christ attended in America after the resurrection and Adam and Eve and John the Baptist also made appearances. Moroni hid the gold plates in upstate New York , where they remained until 1823.

In 1823, either Moroni or God and Jesus Christ (the Sisters and Wikipedia do not agree, so I will give both versions) appeared to Joseph Smith in New York, directed him to the hiding place of the gold plates and told him to translate and publish them. One of the buildings in Temple Square, the Church History Museum, offers a (free) 5 minute film of what is referred to as Joseph Smith’s vision, which reenacts his  visitation by God and Jesus Christ.

At this point, the Sisters show us their Books of Mormon and asks if anyone would like a copy. None of the dozen of us on the tour want one. We are standing behind the Salt Lake Temple. I ask if we are going to tour it, but am told that only those that are deemed holy may enter. Apparently, the tour group is not considered holy enough, so the only pictures I have are from the outside. 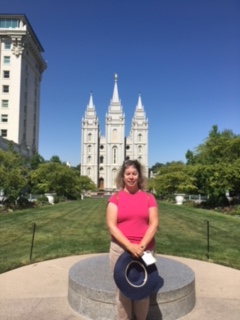 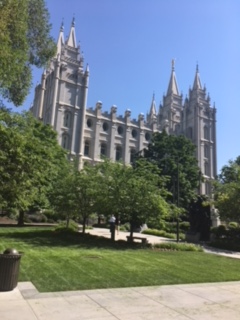 Sister C. starts talking about Mormon baptisms. They are normally done when a child is about 8 years old. The candidate must be physically pure –no alcohol, no coffee, no tobacco. Platinum blonde lady pipes up: “and pure of spirit-no premarital sex.” I don’t know that many 8 year olds that are having sex, Mormon or otherwise.

Sister P. tells us about ancestoral baptisms. Any Mormon can have an ancestor baptized if they are concerned that their ancestor failed to meet all the prerequisites to get to heaven during their lifetime. She explains that it is the spirit of the ancestor who decides whether to accept or not. “How do you know if they accepted?” asks a tour member“ “You get on your knees and pray to God and he tells you,” says platinum blonde lady. Good to know if I ever try to baptize an ancestor.

We proceed to the North Visitors’ Center. In the basement are uplifting Biblical messages and displays of the various historical prophets, beginning with Isiah and Moses. 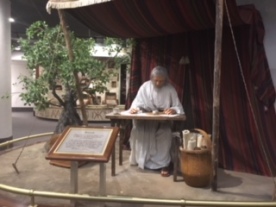 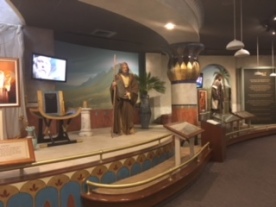 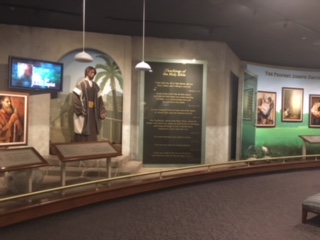 We climb to the top floor, where a statute of Christ stands. The Sisters ask us to sit down and listen to his message. I politely do so and it is mercifully short. Less than 5 minutes. I cannot recall a single word.

The statute is not visible, but me and Sisters C and P are below: 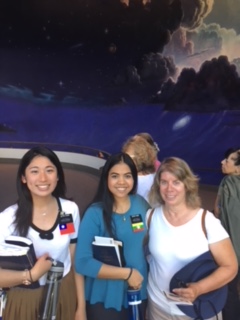 So concludes our tour. I wander around the perfectly manicured grounds with their 100’s of variety of flowers (there are free garden tours), before heading to the Tabernacle. I had always envisioned it looking like a church with a steeple, but in fact, it looks like a spaceship: 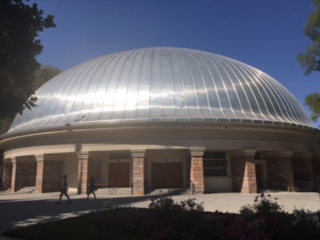 It is a perfect dome, purpose built for music. As was demonstrated by the organist who provided the noon hour recital (free), she could shred a newspaper and drop a pin and both could be easily heard throughout the building without any microphone. Hundreds of people listened to her play 6 melodies, including hymns and America the Beautiful (in honor of the 4th of July). The Mormon Tabernacle choir general rehearses Thursday evening and the public is invited (free), but the choir was on tour and there would be no rehearsal this Thursday. 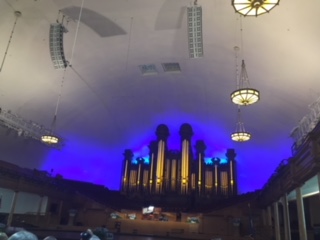 I’ve gone on rather long, but I spent the better part of 2 days at Temple Square. In my next post, I shall review the Mormon film Legacy, describe my geneological search, talk plural wives and address the additional reasons why I am not allowed in the Salt Lake Temple.