I took a detour off the interstate between Mobile and Montgomery to stop in Monroeville, aka Maycomb, aka the Literary Capital of the USA. Still scratching your head and asking “what”? Here’s the answer: Monroeville was the home of two of the most famous authors in the USA-Truman Capote and Harper Lee. They lived next door to each other in the late 1930’s when they were 5 years old and became best friends.

Harper Lee’s father was a lawyer and she spent many hours in the Monroeville courthouse, which stands today as a museum to Harper, Truman and To Kill A Mockingbird. Harper admits that many of Atticus Finch’s traits (the hero lawyer in the novel) were inspired by her father. The novel was made into an Academy Award winning movie starring Gregory Peck as Atticus. The courthouse in Monroeville was not used for the actual movie, but an exact replica was made in Hollywood.

Today, Monroeville is typical of many dying Southern towns. The main square, where once stood dress shops and diners, hardware stores and lawyers offices, still exists, but at noon hour on a Thursday afternoon, I was the only pedestrian. No restaurants were visible on the square, and the only shop that was open was the Thrift Store, a mainstay in every small southern town I passed through. Later, I did see 2 people walk into the library, but no one else.

Inside the museum/courthouse, the cashier asked if I was on a literary tour of the US. “No”, I said, “I didn’t realize there was such a thing.”

“Most definitely,” she replied: “Monroeville is high on the literary tour list. Did I want a walking map of Monroeville so I could visit the sites where Harper Lee and Truman Capote’s houses once stood?”

I declined and instead walked through the museum’s rooms: a lawyer’s office with books and furniture from the 1930’s, a room devoted to Harper Lee’s life and writings and another devoted to Truman Capote’s life in Munroeville, a room with a giant picture of Harper Lee and Gregory Peck when the movie was being shot and the crowning glory, the courtroom where Atticus defended the wrongly accused black man of raping a white woman:

Montgomery is famous in the civil rights movement for the non-violent protest marches from Selma to Montgomery in 1965, led by Martin Luther King Jr. and other civil right leaders. I was looking forward to seeing Alabama’s state capital as a champion of civil rights in the US. I could not have been more wrong. 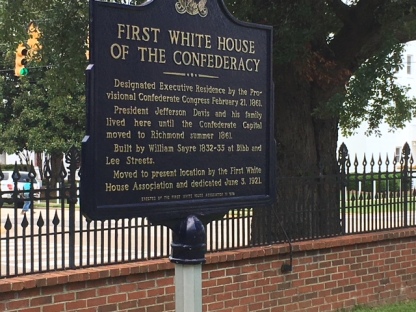 I approached the White House of the South expecting to see a protestor or two, maybe a sign saying that even though its inhabitants had stood for unacceptable (i.e. slavery) beliefs or just something acknowledging that some people (like the vast majority of the population) might find the continued existence of the house offensive. Nothing of the sort greeted me and its location, across from the Alabama State House , the Veteran’s Affairs Department and beside the Alabama State House, ensured its prominence amongst the Alabama government buildings.

I was greeted by a kind gentleman offering a free bottle of water (much appreciated as it was about 35), free admission and a binder containing a walking tour of the building. Papers scattered about the house laud Davis’ achievements – West Point graduate, soldier in the War with Mexico, Mississippi senator, US Secretary of War under President Pierce, first to suggest a transcontinental railroad, first person to envision the Panama Canal Zone, first person to try and buy Cuba…..and reluctant President of the Confederacy. A brief mention of his post Civil War incarceration at the hands of the Union is made but nothing of his pardon. Absent was any reference to the huge numbers of slaves he owned for his plantation (in excess of 100), his fervent belief that the white man was superior to the black man and his basic incompetence as a politician.

But the mere fact that this building stands as a shrine to the principles of the Confederacy is astonishing. As I write, the statue of Jefferson Davis has been unceremoniously relocated from downtown Memphis to an undisclosed location and a “guerilla demonstration” in North Carolina toppled the Silent Sam statue, described as an enduring tribute to white supremacy.

The hypocrisy in allowing this building to stand as it does is amazing, but then, this country elected Donald Trump so why should I be surprised?

Needing something to lighten the mood, I arrived in Nashville and made my way to the dozens (hundreds?) of Honky Tonks lining South Broadway. A Honky Tonk is basically a bar serving mostly beer and whiskey (the Jack Daniels Distillery is 2 hours away) in plastic cups with an unpaid country and western band trying to out yell the band next door with giant speakers. The food is overpriced and greasy, vegetables are hard to find and you cannot take your alcohol onto the street. I survived with my hearing intact and no obvious case of food poisoning. 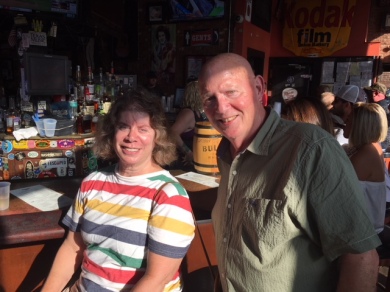 The next day I did the honorable thing- I went to the Country Music Hall of Fame. After paying the $25 entrance fee, I saw the first exhibit-something devoted to Taylor Swift and education. I passed and entered the next one-a tribute to the Judds. My lingering memories are they sure got divorced a lot and they had really bad hair days in the 1980’s, 1990’s and early 2000’s. They seem to have tamed their locks more recently, but the how and why were glossed over.

The Hall of Fame charted the early start of country music with a few videos from the 1920’s, then proceeded to identify every single inductee with a “so and so rose from obscurity to fame with [insert name of song(s)]” and “He or she donated [check the box] boots, a guitar, a suit or, in Elvis’ case, a car.” On and on and on. After 2 hours of blurring names and songs, I gave up and left. 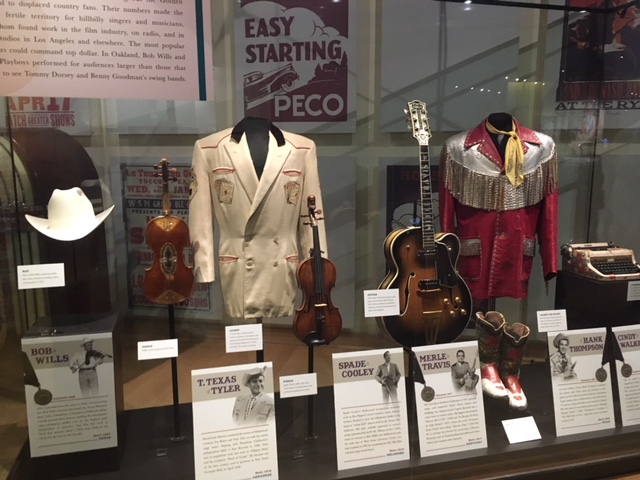 But I had the Grand Ole Opry ticket-surely that would be better. Let’s be clear – I like some country music. I have Johnny Cash on my playlist, I love Kenny Roger’s The Gambler and I think Dolly Parton’s rendition of 9 to 5 is the best thing about the movie. But after an hour at the Grand Ole Opry, I was bored. I emailed my son a picture with the comment “ Stuck here listening to country music for 2 more hours and I paid 70 (us) for the privilege. Definitely once (and only once) in a lifetime experience. Performer is now making sucking crawfish jokes.” He responded, with the wisdom of a 24 year old: “No one is forcing you to stay :p”. He was right. I am retired. My motto is “do only what I want.” I left. 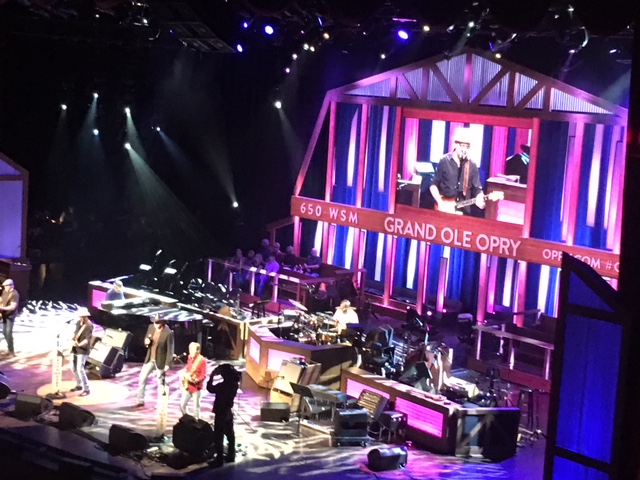