Having tired of the lack of parking spaces in Yellowstone and Lake Louise, the large crowds of tourists in San Francisco and the cool weather that accompanied me from Oregon to San Simeon on the Pacific Coast Highway, I headed to the perfect antidote: Death Valley. In July….. During a heatwave……Temperatures were forecast to reach 50 degrees celcius (122 degrees Fahrenheit) at Furnace Creek, the main station in the park,   population 24.   I came to understand the furnace part, but no creek was visible anywhere near that I could see unless one counts the much appreciated flush toilets at the Visitor Center.

Let’s back up a little. I like hot weather. I also like deserts, so Death Valley National Park seemed like a perfect destination. Granted, travel there was not advised in the heat of the summer, but I followed all of the recommendations. I had extra water (a four litre jug in my car), sunscreen, sunglasses, a wide brim hat, sturdy walking shoes and a paper map, since GPS tends to lead one to the shortest route and going on non-paved shortcuts through the desert was a definite no-no. Google maps and most other cellular service were iffy at best. My car appeared in good shape – no warnings to check my tire pressure had occurred recently- and it was air conditioned. In any event, I would do as the literature said, if your car breaks down, stay in it and wait for help.

I left my hotel in Ridgecrest at 5:30AM, just as the sun was rising. Although Death Valley is supposed to have wonderful sunrises, the prospect of driving 90 miles on an isolated desert road to the park’s entrance at 4:00AM did not appeal. As it was, I did not meet another vehicle until well after I arrived at the park. 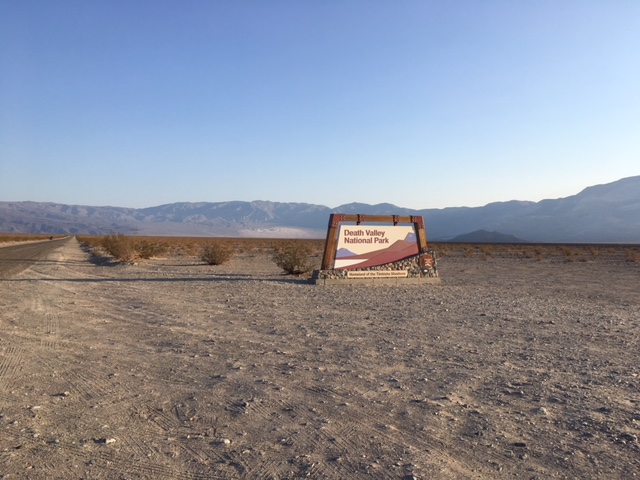 Death Valley had been inhabited by native American Indians for over 10,000 years (and still is today), but the first white men to visit were miners eager to get to California in 1849 to join the gold rush.. They were stranded in Salt Lake City and warned not to go further west during the winter months (remember the Donner party). Impatient, 125 pioneer wagons set off for the south, seeking a short cut to California. Arriving at an impassible cliff in Nevada, most of the wagons gave up, but some continued on, reaching Death Valley in December, 1849. They wandered aimlessly through the desert for three months,  eventually sighting the Sierra Mountains, where they headed south before finally arriving at civilization. Upon leaving the desert, one miner turned back and said “good-bye death valley” to the place he thought would be his final resting place. The name stuck.

Death Valley is as intimidating today as it must have been in 1849, but at least air conditioning in commonplace and there are well marked pave roads leading through the park to the major sites. I followed the route, stopping first at the Golden Canyon. 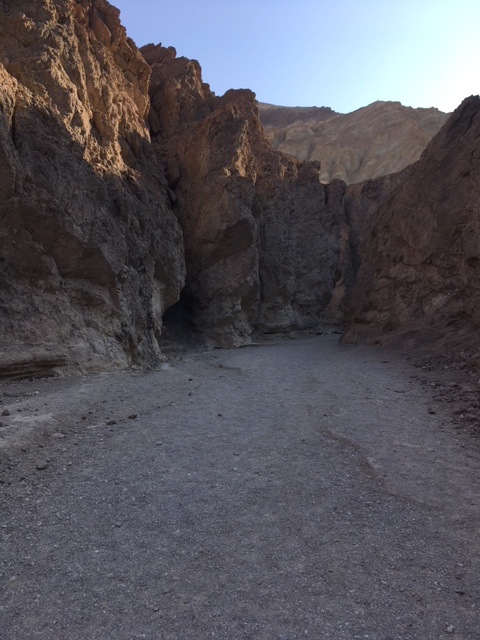 The hiking trail was rated moderate, but at 5 miles it would take half a day, going well beyond the 10:00AM “Do not hike” warning time. Besides, no one else was in the parking lot. I decided against the hike, took a picture and carried on to the next highlight.

If the Golden Canyon looks familiar, it is because it and two other Death Valley landmarks (the Artist’s Drive and Dante’s Peak, a viewpoint overlooking the valley) were locations used as Tatoonie, Luke Skywalker’s home planet in the original 1977 Star Wars and four subsequent Star Wars films, along with other locations in Tunisia.  To think, I walked the same ground as R2D2 and C-3PO!

The Artist’s Drive is described in the brochure as a “dipping, diving, curving, one-way road that weaves through striking ravines and colorful rock formations. The highlight of the nine mile loop occurs at the Artist’s Palette, where sea green, lemon yellow, periwinkle blue and salmon pink mineral deposits are splashed across the barren background like brilliant dabs of paint…The effect is most intense during the evening…” It wasn’t evening and, although it was a bright sunny day, the heat created a blanket of haze that covered the valley. The Artist’s Drive did dip and dive and curve, but it looked mostly brown to me. 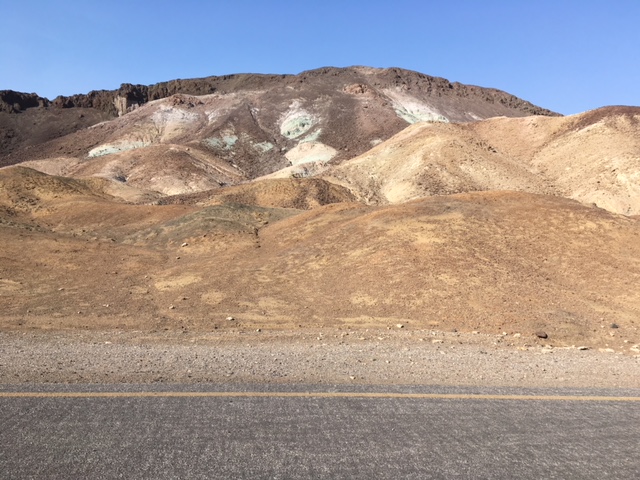 The highlight, or rather lowlight, of Death Valley is Badwater Basin, the lowest point in North America at 282 feet below sea level. By comparison, the lowest place on this planet is the Dead Sea, straddling Israel and Jordan, at about 1450 feet below sea level. In bygone years, the Badwater Basin was a salt water lake which had long since evaporated, leaving a layer of salt 1 to 5 feet thick.

Badwater Basin is also the hottest place on earth, having registered a temperature of 56.7 (134 degrees Fahrenheit) early in this century. On the day I visited, the temperature was a cool 50 degrees and only 116 degrees at the Visitor’s Center. 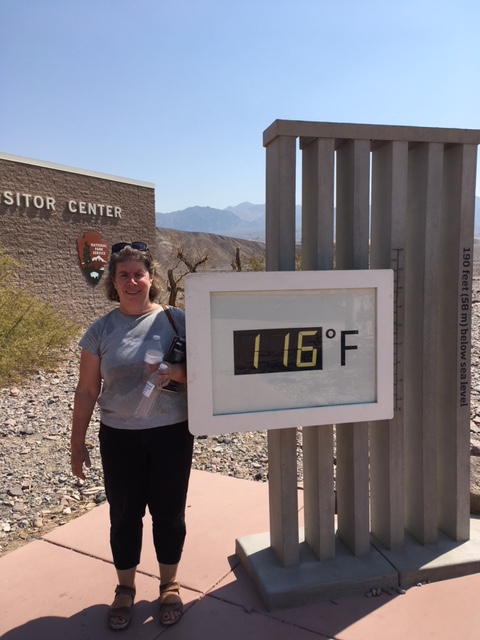 I arrived at Badwater Basin shortly after 9:00AM. The salt flats were about a mile from the boardwalk. As I walked out, the few tourists who had been there earlier returned to their cars. I was along except for a teenage boy. He took my picture, then I turned around to gaze at the vast, salt lake. There was complete silence. No other tourists, no hawkers trying to sell t-shirts or bike rides. Just me, the salt and miles of desert as far as the eye could see. Much as I would have loved to stand there admiring the vista before me, it was 50 degrees, the sun was beating down and I was hot as hell. Death Valley had lived up to its reputation. 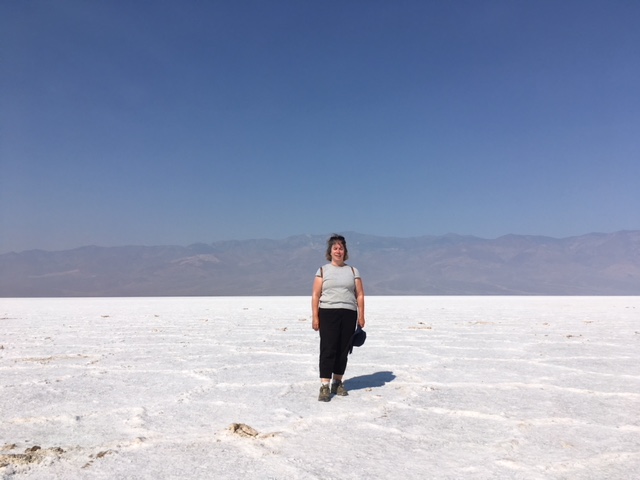