Ethiopia has a long and proud history, an ancient civilization once amongst the most powerful in the world, and a religious heritage going back to the time of Solomon. My tour of the country highlighted its historical legacy and dispelled me of any notions of Africa being a dark, savage continent. But a word of caution: Ethiopians are believers, and some of what I repeat here was learned from local guides/believers and may not necessarily be borne out by archeological or other historical data.

The Cradle of Civilization:

The bones of the first humanoid, a half man-half ape who walked upright on two feet, was discovered close to Harar in eastern Ethiopia in 1974. The anthropologists who discovered it went back to their camp that evening, where Lucy in the Sky with Diamonds was playing on the loudspeaker. After determining the skeleton was female from the pelvis, she was named Lucy. She is estimated to be 3.2 million years old, about 12 at her death and possesses both human and chimpanzee features. Scientists have recreated her image, which rests in the National Museum of Ethiopia, along with replicas of her bones. The real bones are protected in a non-accessible laboratory. 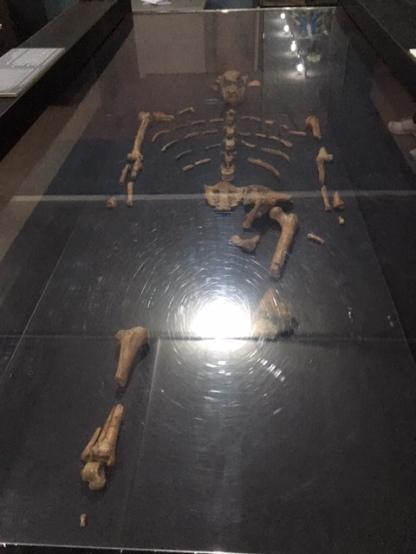 The Sabeens, the Queen of Sheba and Axum:

Fast forward 3 million years, to Biblical times. Some Ethiopians believe the flood in Noah’s story destroyed the original Punt civilization and buried Atlantis, which was located in Ethiopia. Others believe the Egyptian civilization originated in Ethiopia and there are similarities between the peoples, including sun worship and pyramid building. I’m not sure if the Egyptians would agree.

More scientifically acceptable are the Punt’s successors, the Sabeens, who occupied the lands comprising Ethiopia, Eritrea, Somalia and Yemen beginning in the second millennium. Their most famous monarch was the Queen of Sheba, who ruled in the 10th century BC. Although she was born in Yemen and her main palace was there, her bathing place is said to be in Axum:

The Queen journeyed to Israel to meet Solomon, to acquire his wisdom and to open up trade routes between her kingdom and the Israelites. Frankincense, gold and ivory were in high demand in Israel. Once there, she and Solomon shared a romp, resulting in her becoming pregnant. She returned to Ethiopia, converted to Judaism and gave birth to a son, Menalik. At age 22, Menalik returned to Israel to visit his father. He came back to Ethiopia with the Ark of the Covenant, the tablets God gave to Moses on Mount Sinai with the Ten Commandments and the box containing them. Menalik also brought 12,000 Jews with him, thus (maybe) beginning the long history of the Jews in Ethiopia. Others believe the Jews were one of the lost tribes on Israel who disappeared after the Assyrian invasion of Israel in the 7th century BC. Still others suggest most Jews arrived in the 1st to 4th century AD, as traders who settled in the area.

Meanwhile, the great Axumite or Aksumite kingdom was establishing its capital at Axum. Its emperors, like all former and subsequent emperors, claim to be descended from Solomon and Menalik. The Axumites bear similarities to the nearby Egyptian dynasties; its kings built tombs and stellae to aid in their ascension to the afterworld. They worshipped the sun and the moon and such symbols, along with doors and windows, decorate the stellae:

The Ethiopian Rosetta Stone, with text in Greek, Sabeen and Ge’ez (the local semitic language and predecessor to today’s Amharic), is on display in Axum:

The Axumites were great travelers and traders, considered one of the 4 most powerful kingdoms in the first century, along with the Romans, Greeks and Chinese. Their most famous is King Balthasar, one of the 3 wise men who visited Israel during the birth of Christ. The King abdicated after his journey to Jerusalem, so his tomb was never used. His bones were initially buried in Constantinople, but Crusaders carried them back to Cologne, Germany in 1164, where they rest today.

In 330 AD, the Axumite king Ezana embraced Christianity. He forcibly converted everyone, but the Jews who refused to convert left for the mountain region near Gondar, where they established their own kingdoms. Meanwhile back in Axum, an estimated 70,000 people lived in the city. The empire encompassed all of today’s Eritrea, Somalia and Yemen. Remnants of a 4th century palace, built upon the Queen of Sheba’s palace foundations, are still visible near Axum:

All good things must come to an end. Beginning in the 7th century, Muslims from across the Red Sea started invading Africa, eventually capturing the Axumite port of Adulis, leaving the Axumite empire a landlocked country. Trade deteriorated, the plague arrived, overgrazing and deforestation weakened the kingdom. Sensing weakness, nearby kingdoms attacked and captured land; some Muslims but most significantly the northern Jewish kingdom, led by Queen Yodit Gudit. She is blamed for the destruction of many early churches, but most of the guides admitted she was a scapegoat for all the woes of the 10th century Axumites.

Descendants of the Solomonic dynasty (the continued genealogy is debated) gradually moved their capital to the city of Roha, renamed it Lalibela after its king and set about creating a new Jerusalem between the 11th and 13th century, resulting in 11 rock hewn churches. The actual dating and length of time taken to build all the churches is also debated, but what is certain is the magnificence of the structures. Each was carved out of a single rock, and until UNESCO erected scaffold roofs over them in 2004, were not visible except close up. The most famous, and scaffold/ artificial roof free, is St. George: 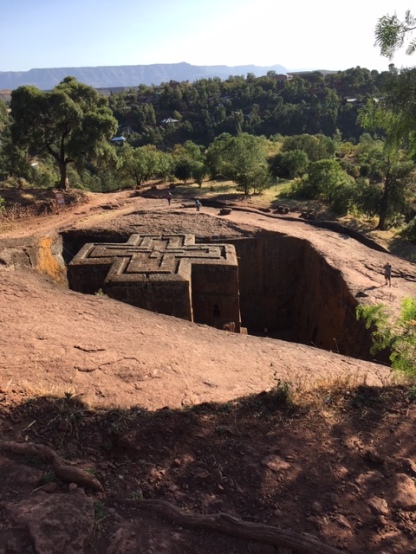 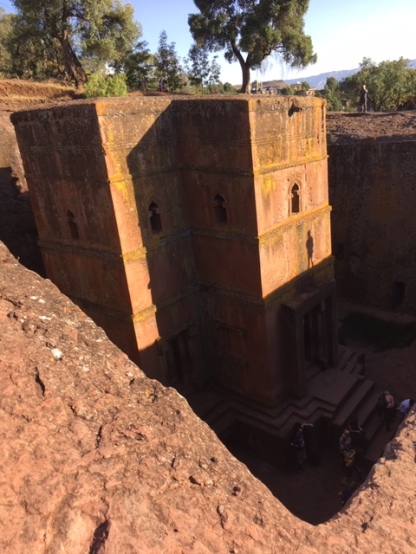 Controversy surrounds the why and architecture of the churches. Historically, Ethiopia had not built into rocks and because some of the elements are suggestive of the Knights Templar, conjecture abounds that Crusaders on their way to Jerusalem provided the designs and techniques. In terms of why they were constructed in the rocks, some suggest it was a symbol of humility; others believe it was to hide the churches from invading Muslim armies. 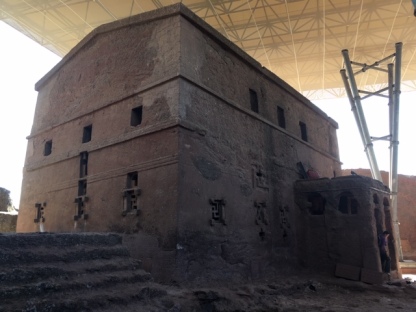 Whatever the purpose, the churches are both a major tourist draw and a pilgrimage destination for the millions of Ethiopian Orthodox Christians. The churches accommodate both; sermons are carried out in the morning when tourists are banned; foreigners are allowed in only between 2:00PM and 5:00 PM, following the payment of US$50. Divided into the north and south clusters, we reached the first church by walking about 20 metres down rough, rock cut steps. After taking our shoes and hats off and ensuring our shoulders and knees were covered, we entered our first church. Inside, carpets cover the uneven floors and windows in the shape of crosses or moons (the symbol of eternity) lit the interior. Most contain the three room construction common to Ethiopian Orthodox churches- the outer chamber for chanting and listening to the sermon, a second chamber with pictures from the Bible where communion is taken and the third chamber, the holy of holies, where the replica of the Ark of the Covenant is kept and only priests are permitted to enter.

After spending a few minutes inside, we proceeded to the next church. Each church contains a trench surrounding it, with tunnels or narrow passageways leading to the next church. Our guide led the way, with our shoe man (hired to watch our shoes outside each church) knowingly offering a steady hand to climb the tall steps and help us keep our balance on the rocky path. All the churches are dedicated to a particular person: St. George, St. Emmanuel, the Virgin Mary, our guide explaining the sometimes unique Ethiopian story attributable to each, all illustrated by the paintings inside.

In the 14th century, Muslims continued their invasion of Ethiopia, capturing large swaths of land along the Eastern coast and the highlands. To assist in stopping their march, Ethiopia invited the Portuguese to their country. The Portuguese ended the Muslim progression, but took to converting Ethiopians, including one of its emperors, to Catholicism. This led to civil war, the Ethiopian Christian Orthodox Church eventually prevailing. They executed or expelled the Portuguese and Ethiopian Orthodoxy regained its predominant role.

In 1635, Emperor Fasilides, still from the Solomonic dynasty, founded the city of Gondar and made it the capital. He and his 6 successors embarked on a building scheme, each constructing their own palace, resulting in the remains of 7 palaces being open to the public. Fasilides’ is the best preserved, and the grandest: 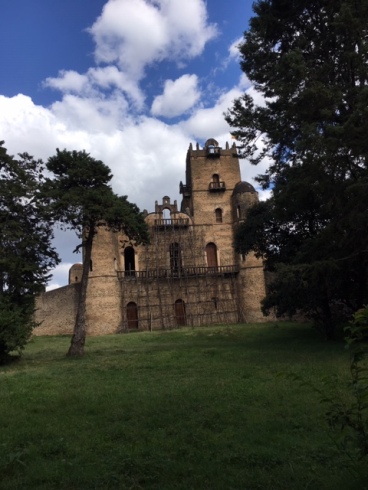 The Emperors erected other buildings necessary for emperors, including loads of churches and a very ornate bath, which is used today during the Timkut ceremony:

Gondar is popular due to its cooler location in the mountains and near Lake Tana. So popular that the Italians, when they occupied the country between 1936 and 1941, designed buildings in what has been called the Fascist style, including a cinema and the Post Office: 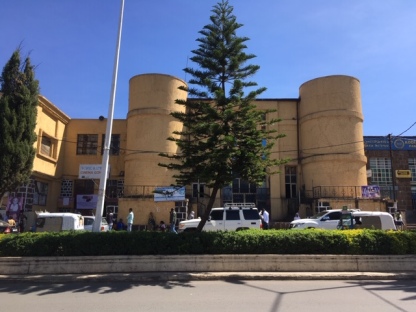 Addis Ababa became the capital in 1886, following Ethiopia’s reunification after centuries of splinter. The Emperor Menalik II began the process of modernization, but is best known for defeating the Italians, who invaded in 1896 seeking to add another colony to its holdings. Italy was roundly defeated at the Battle of Adwa, enabling Ethiopia to avoid colonization. It was the only African nation to do so, as well as the only African nation to defeat an European power, facts of which the Ethiopians are very proud.

Another Solomonic descendant, Haile Selassie, was crowned emperor in 1930. In 1936 the Italians under the fascist Mussolini, still smarting from their earlier defeat, returned to occupy Ethiopia, a brutal affair lasting until 1941 when the British invaded and removed the Italians. Haile Selassie had fled to Bath, England, in 1936, but returned in 1941 and ruled until his overthrow in 1974. More about that in the next post.

Apologies for the somewhat long history recitation, but I’ll end this narrative with one final photo, that of Selassie’s bedroom in his palace in Addis Ababa: 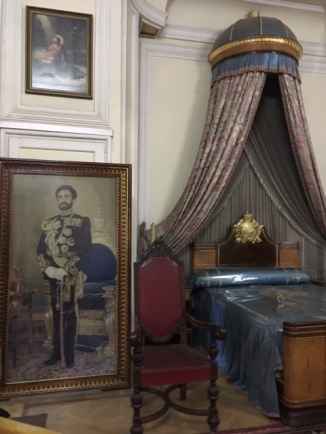 Next: Ethiopian Journey III: The Culture