Slow travel has been defined as “less emphasis on manic sightseeing and more on taking in your surroundings at a relaxed pace” (smartertravel.com. The Art of Slow Travel). That is exactly what I have been doing in Paris.

Having visited Paris previously and seen the major sights, I felt no compunction to “do Paris” as a tourist. I stayed in an apartment in the 17th arrondissement, with nary a place that makes Trip Advisor’s Things To Do section for miles. I had no lengthy list of museums to visit or places to go. Instead, I slowed down to a turtle’s pace, relaxing from the hectic touring of the past 5 months and enjoyed the best of Paris- the architecture, the chic women dressed in the latest styles and, of course, the food and wine.

My days took on a lazy routine. I would wake early, but lie-in, reading a book or streaming TV on the IPad. Sadly, I cannot let go of world events, thus CNN International and SkyNews (from the UK) were my go to channels. Inexplicably, CBC no longer permits live streaming out of Canada, but Global News has its national news on the internet.

Breakfast, or more accurately, brunch or an early lunch, would start with a quick trip to the boulanger across the street to pick up a warm baguette and the decision as to whether to have a classique or a traditional one, followed by a stop at the fromagerie to choose from hundreds of cheese varieties and,  lastly, to the supermarket for eggs. Food was not outrageously priced- a baguette was .95 Euros-about $1.50, chicken breasts cost the same as in Canada but a bunch of asparagus cost the equivalent of $12. Needless to say, I didn’t eat a lot of asparagus.

I did, of course, have a fair bit of wine which was sold everywhere: supermarkets, convenience stores, specialty shops. A cheap bottle of not awful wine could be had for under $4.00; but even in the $8 to $12 range there was a good selection. Bars, restaurants, brasseries were ubiquitous. On the 45 minute walk to my French class, I counted 42 establishments where I could sit down and order wine. That became part of the routine – after French class I would choose a patio, nurse a glass of wine and complete homework. A few hours later, it was dinner time and the choices were endless and mostly delicious.

It was impossible to completely resist visiting the tourist sights, but one look at the line-ups at the Eiffel Tower and the Louvre convinced me to find something less busy. I travelled by train to the Palace of Fountainbleau, a medieval chateaux that is to Napoleon what Versailles was to Louis XIV. A mammoth, gaudy, over-the-top tribute to the nobility’s self indulgence, pomp and grandiosity. Although used by the French royals since the 12th century, the décor and furnishings focus mostly on the Napoleonic era – Napoleon’s bathroom (he liked to take baths), his son’s nursery, the abdication room where Napoleon ceded his throne to the British. 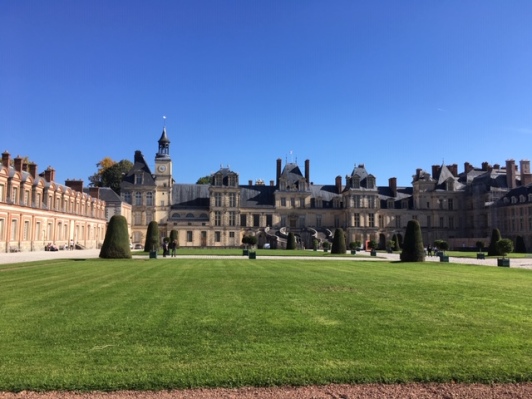 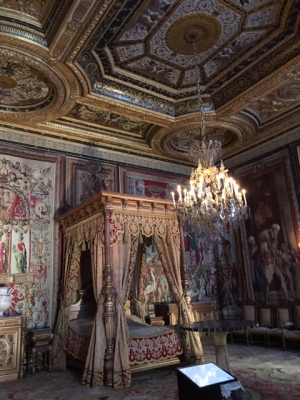 Inspired by the tapestries at Fountainbleau, I walked to the Gobelins Tapestry museum and factory in the 13th arrondissement. Gobelins was one of the pre-eminent French manufacturers of tapestries. From its beginnings as dyers in the 15th century, it rose to become the official supplier to Louis XIV. Massive Gobelins tapestries line the walls of both Versailles and Fountainbleau. Tours of the factory are offered by appointment only, which I did not have, but the museum showcases the evolution of tapestries with impressionist and abstract designs, far cries from traditional tapestry scenes of Greek Gods or medieval wenches on horseback. 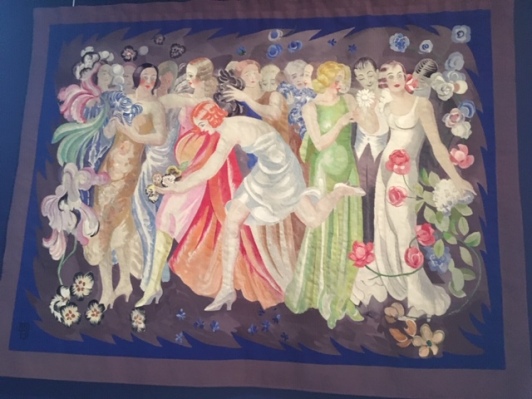 It was impossible not to stumble upon parks during my walks. Famous ones, like the Parc Monceau or Jardin du Luxembourg, with their well manicured flower beds, fountains and broad gravel paths. But also smaller, hidden gems behind apartment buildings or next to a passageway. Always with a plaque declaring its name and usually a bronze statute honouring its namesake, these parks offered a welcome antidote to tired feet.  Playgrounds were filled with screaming toddlers, mothers congregated on the grass while their babies crawled about and seniors sat together on the benches, enjoying the breezes and shade of the trees.

Greenery also prevails  in the cemeteries in Paris. The 14 cemeteries within the city limits are jammed with crypts and mausoleums and are a who’s who in the art, science and political world. Meandering though, on their wide cobblestone sidewalks, reading the tombstones and enjoying a picnic at the graveyard is a wonderful way to spend an afternoon. The Montmarte and Pere Lachaise cemeteries beckoned, sans picnic. The latter has been home to more than a million burials, .including the resting places of Edith Piaf, Chopin, Marcel Proust and Oscar Wilde. But it is not easy to be buried here –one has to have either lived or died in Paris and pay a minimum of 15,000 Euros for a 30 year lease. If the lease is not renewed the remains are dug up and removed.

Jim Morrison, the iconic lead singer of The Doors, died in a bathtub in Paris in 1971, thus fulfilling one of the requirements for being buried in Paris. His gravestone at Pere Lachaise is one of the most frequented, with rumours that die-hard fans drink beer there.

Oscar Wilde’s grave was damaged by women planting kisses on the stone, so a pexiglass wall was erected to protect it:

I spend my days walking around, for Paris is an eminently walkable city. One noticeable improvement since my last time here is the lack of dog crap littering the streets. Way back in the 1970’s, my most lingering impression centered around the prevalence of dog shit on all the sidewalks and the necessity of always watching where I stepped. But no more, although perpetrators continue to defecate. Initially, Paris mobilized a fleet of mini- poop vacuums to gather up the stuff, but when that proved only 20% effective, Paris moved to the time-tested tactic of dire punishment-fines of up to 500 Euros for failing to pick up after pooches. Signs dot the city, reminding Parisiennes of their duties.

Sadly, dog poop has been replaced by an even more annoying hazard – smoking. As Paris has moved to ban smoking indoors, smokers have taken to the streets in droves. At every crosswalk, someone but more usually 3 or 5 people are puffing away. Just walking down a street usually entails having smoke blown in my face or hair by some scurrying smoker, balancing a cigarette between clenched lips or sucking on a vaper pipe. Inevitably, when I sat down in a patio, far away from everyone, a smoker would sit down next to me, light up and let the smoke drift towards me.

Smoke aside, its been a wonderfully relaxing month in Paris, no doubt helped by the Indian summer, with temperatures in the mid 20’s and little rain. I have loved walking aimlessly around, delighting in unique store front windows, sampling the wine, admiring the architecture. But like most inveterate travellers, sticking around has its limits and there are just too many new places to discover. I’m temporarily off to different pastures tomorrow.