Some places demand you put logic aside, close your eyes and enjoy the experience. DisneyWorld and Colonial Williamsburg are two such places; Tombstone, Arizona is another.

Located about 90 miles south east of Tucson, Tombstone was founded by a prospector named Ed Schieffelin in 1879. It was one of many boom towns supported by a nearby silver mine, boasting a population of over 14,000 by 1885.  4 churches, a bowling alley, a school, 2 banks, 3 newspapers and an opera house frequented by the respected folks (the Schieffelin theatre), a theatre for the not so respectful miners and cowboys (the Bird Cage) along with hundreds of saloons, some brothels and gambling halls lined the main streets. 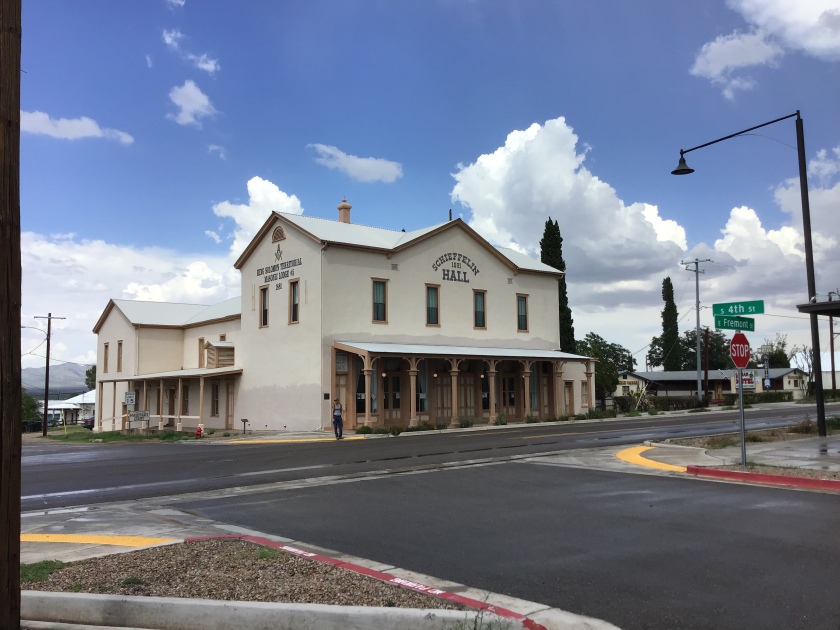 The population was split between the miners and the “cowboys”, but that term was used negatively to refer to the outlaws who rustled cows and smuggled them over the nearby (30 miles) Mexican border. Near Tombstone, some cowboys attempted to rob a US stagecoach in March, 1881, killing a passenger and a popular driver. Deputy US Marshal, Virgil Earp, his two temporary deputies and brothers, Wyatt and Morgan, along with a dentist, Doc Holliday, set off in search of the perpetrators. This started a feud which culminated in the fight at the O.K. Corral on October 26, 1881, in which 3 cowboys (Tom McLaury, Frank McLaury and Billy Clanton) were killed.

After the original fight, Morgan Earp was ambushed and killed. Wyatt and Virgil were run out of town in 1882 by citizens tired of the gunfights. Wyatt traveled to a number of western boom towns, including one in Alaska, before settling in Hollywood in the 1920’s and befriending actors. Doc Holliday died in Colorado of tuberculosis at the age of 36, after escaping extradition proceedings in New Mexico for his role in the O.K. Corral battle and another posse that killed more cowboys in 1882.

Tombstone suffered an equally unglamourous demise. The main pumping plant servicing the silver mine burned in 1886 and, shortly thereafter, the price of silver slumped. People left in droves. By 1890, only 1900 residents remained, dwindling to under 1000 in 1900.

Tombstone was revived as a tourism spot, in large part due to its well -preserved buildings. Today, one can visit the Birdcage Theatre, complete with appropriately clad ticket takers, stroll along the boardwalks where photographers offer to dress you up in period costumes and produce sepia coloured photos or enter a saloon for a bite to eat or a wine tasting which I am not sure was popular in the 1880’s. The main street is packed with red dirt, becoming a slush pond on rainy days.

Stagecoach rides are offered for $10, with a driver who provides commentary through electric speakers and seats far more padded than the originals.

A diorama shows a 25 minute movie about Tombstone and the gunfight. That gunfight is reenacted 3 times daily around town and at the actual sight of the gun battle, which was a vacant lot next to the photography studio of C.S. Fly.

The audience is encouraged to clap for the good guys and boo the bad guys. The climax is the 30 seconds of gunfire, during which 30 bullets are fired, just like in 1881. Two of the bad guys die; another staggers around for a few minutes. At the conclusion, the lawmen graciously pose for pictures and ask for donations to the starving actors fund.

The former newspaper office of the Tombstone Epitaph is part newspaper museum and part tribute to its founder, John Clum. Originally from the east, he fell in love with the west when he became an Indian agent, maintaining order on a nearby Indian Reservation. He counted, as one of his triumphs, the capture of Geronimo (who was freed by Clum’s successor, leading to 15 years of bloodshed and Indian wars until he was recaptured). Clum was elected mayor of Tombstone in 1881 on a platform of ending the lawlessness, despite beign good friends with Doc Holliday and Wyatt Earp. For a while, he succeeded, making carrying guns in Tombstone illegal. That was short-lived – Arizona is now an open carry state.

Hokey as it is, Tombstone is fun to visit. It is lovingly preserved (although purists argue some of the restorations are recreations gone too far), the town folks friendly without being pushy and the downtown large enough to wander through without being bothered by throngs of tourists. It doesn’t take itself too seriously and in contrast to places like Cody, Wyoming, doesn’t present an idealized version of the Wild, Wild West. Streets get muddy, towns burn, mines come and go, people die in gunfights.