Tombstone’s approach to avoiding its inevitable ghost town status was to turn itself into a tourist attraction, lovingly restoring buildings to 1880 décor and having the local townsfolk dress in period costumes. Bisbee, 30 miles southeast, took an entirely different approach. It tried to recreate itself as an artist’s paradise, enticing artists and galleries, fanciful murals and, for reasons that escape me, zombie culture. It succeeded somewhat, reversing the population decline from the mid-1970’s to become one of those towns whose website describes itself as “having a thriving arts/music/hospitality scene”. 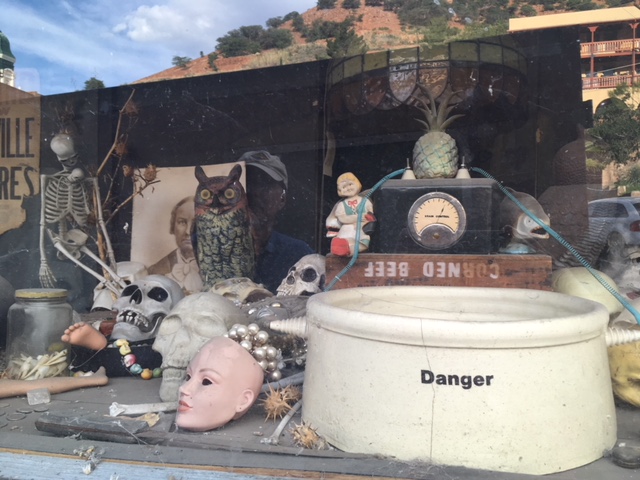 The single throwback to Bisbee’s bygone era is the Queen Mine, a copper mine dating  from the 1880’s. It operated underground until after World War II, when it became an open put mine, the remnants of which are still visible today: 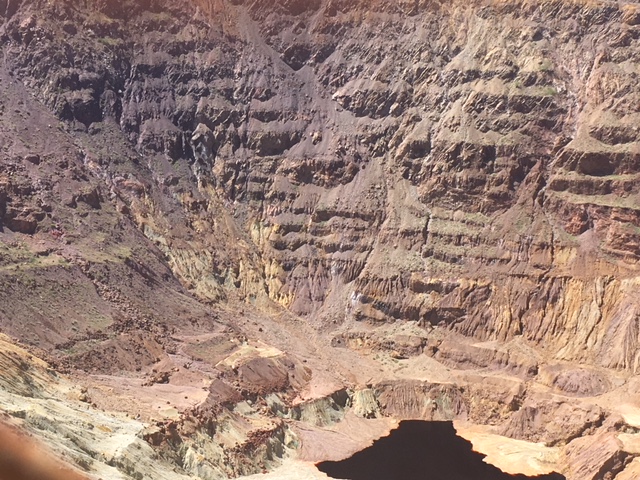 The mine closed in 1975, but tours are offered daily, which is where I found myself at 9:00AM. My travel companion and I first watched an informative film about copper mining, then were fitted with appropriate attire: a vest, a hard hat and a flashlight. We signed a waiver, indicating we fully understood and accepted all of the dangers inherent in going into an underground mine and met our guide, Benny, and the train that would take us into the mine. 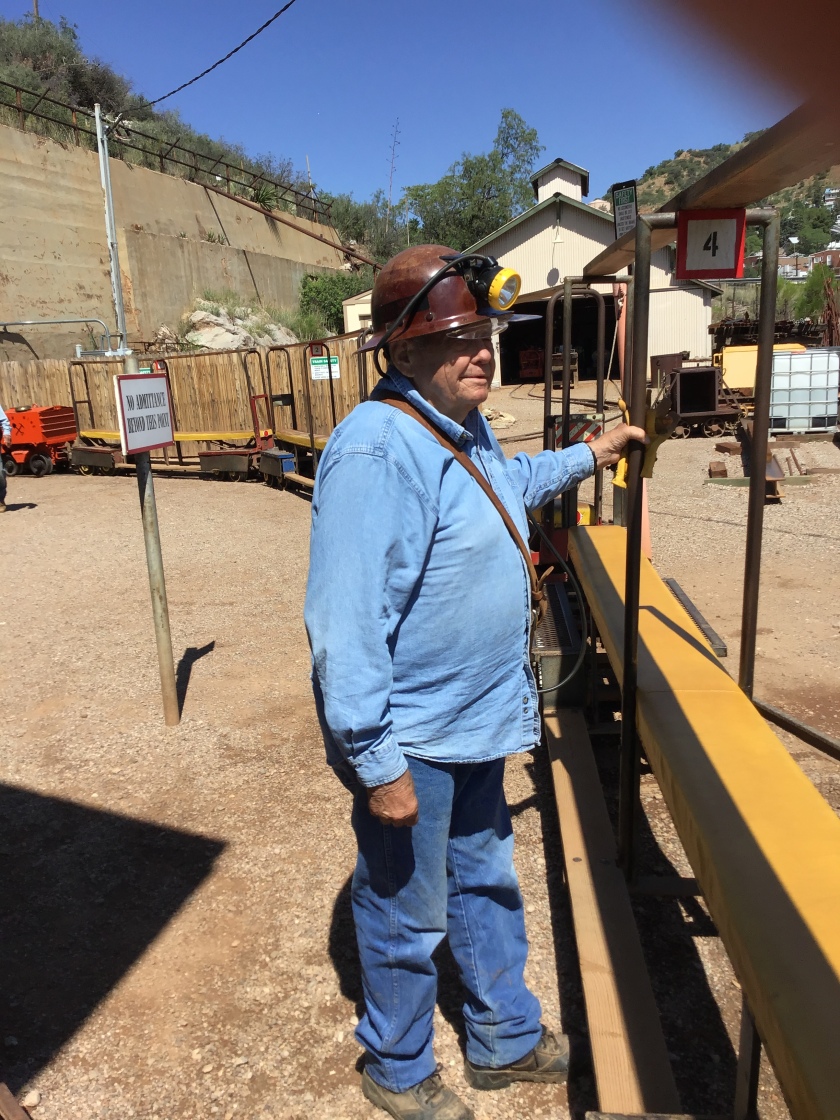 Benny was a former miner at the Queen Mine. He started  in 1957, after finishing high school ,and stayed until the mine closed. The mining company offered to send him to school after he lost his job so he went into law enforcement and was a police detective for 27 years. He was also elected to the Bisbee town council before coming to the mine to lead tours 8 years ago. As a miner, he mostly laid railway tracks in the mine (depending on what site you look at, there are between 350 and 5,000 miles of railroad under Bisbee), but he also did search and rescue in the mine (there were 3 deaths-1 heart attack victim, the other 2 mine accidents) and set dynamite. Needless to say, he was a wealth of information about mining.

We were the only 2 on the  tour, so we hopped on the train- reminiscent of the Disney World mine ride except there was no water and we straddled the padded yellow posts on the train. We entered the mine and were thrust into near darkness, tootling about 1500 feet into the mine.

Our flashlights showed the path-endless rail lines and rough cut tunnels. We made a few stops. At the first one, Benny showed us the shafts through which ore was shunted from level to level – sort of an ore laundry chute. 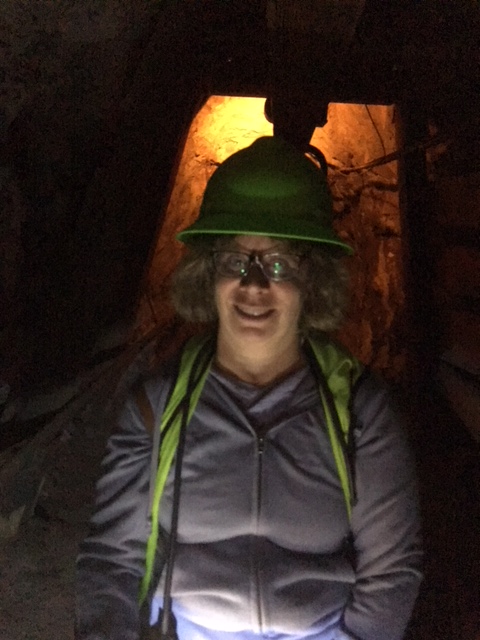 At the next stop, timbers provided support to the rock walls and created doors that acted as firewalls. Benny explained that only douglas fir and pine trees were used in mines since they audibly creak if the earth is moving, a sure sign of a mine cave-in. The other sure sign (hence the title of this post), is mice and cockroaches scurrying out the of a tunnel. According to Benny, cockroaches (and mice) have a symbiotic relationship with the earth that allows them to know in advance when it is moving. When cockroaches are racing away from a tunnel, that is advance warning  a cave-in is about to happen.

I will digress somewhat here. I do not like little things like cockroaches or geckos that scuttle about, scaring the crap out of me when they show up near pools or sidewalks. I have learned to tolerate geckos by repeating the mantra “they are my friends; they eat mosquitoes.” Having lived in Winnipeg for 10 years, I know the benefits of limiting mosquitoes, not that I ever saw a single gecko in Winnipeg. But I never knew of any use for cockroaches until, twice, in the last 48 hours, have learned of 2 valuable services they provide.  In the Biosphere2, I was told  cockroaches aerate the rainforest by eating dead leaves. Now, in the mine, I learn they forecast cave-ins. Useful information I suppose, but since I tend to be in rainforests and mines only once a decade,  I am not convinced the world would be better off without cockroaches.

Back to the mine tour. Benny demonstrated how to properly install dynamite in a mine. It is never a single stick, but up to 26 sticks arranged in a circle. The fuses are each an inch longer than the last, so there is not a single blast, but 26 blasts starting from the center and moving outward. The miners listen for 26 blasts, If they only hear 25, they know they have a problem.

Benny showed us various tools and contraptions used by the miners, including the sanitation device for –use your imagination- but there are no bathrooms in a mine. The miners were paid $45 per day, with the ability to earn a lot more if they exceeded their daily quotas. Benny often laid more railroad tracks than required (14 feet per day with a partner), so some weeks he made a fortune – up to $2000 a week.

An hour and a half later, we re-emerged into the sunlight and the warmth of an Arizona summer,  with increased  knowledge of mining, much more respect for the miners and maybe a tiny bit of tolerance for cockroaches.

One thought on “More Uses for Cockroaches: Queen Copper Mine in Bisbee, Arizona”