Despite living in Edmonton for 7 years, I had never visited Jasper National Park or driven the Icefields Parkway between Jasper and Banff. It is rated as the most scenic drives in Canada (according to canadiansky.co.uk). My last memory of driving through the Rockies was an 8 year old, being bundled into a car with my brother and sister, a cousin, a babysitter and our two dogs while my mother drove us to Kelowna for a month long holiday. It was time to remedy these omissions in my travels.

Jasper National Park: First stop in Jasper was at the tourist information center , inquiring about the bear temperament that day (use normal precautions) and Lake Louise (parking lot was already full).  I drove to the first suggested hike at Athabasca Falls. If I was doing an assignment for a creative writing course, I would wax poetic about the blue grey river, the powerful swirls of water hitting rocks, etc., but I am not. It was pretty. The mist acted as a natural air conditioner, much appreciated on this 30+ degree day. I took a pleasant walk down the Athabasca river, observing the falls from different angles. A large placard reminded us not to go over the fence. If so, it warned, hypothermia (these were glacial waters) would happen in seconds and one would be pulled quickly to the falls where death would happen instantly. A few feet away was a memorial to “Justin”, where a wreath of flowers, a smurf doll and other items lay,  but his relationship to the falls was not apparent.

The next hike was at the Sunwapta Falls. They, too, were pretty and provided a cooling mist. 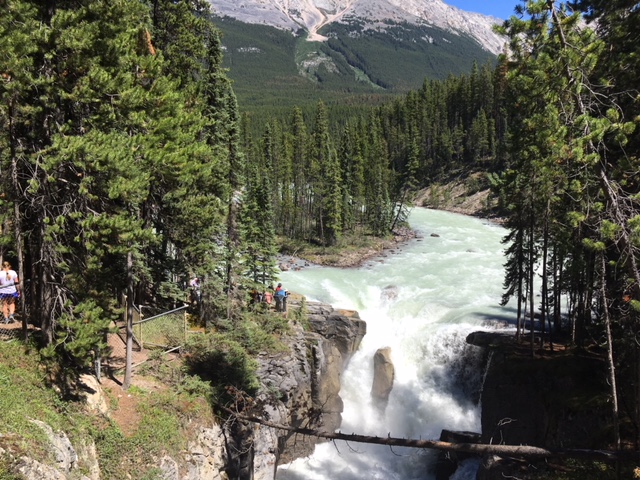 From there, I drove the Icefields Parkway. It was two hours of spectacular scenery-mountains, glaciers, trees, a herd of goats, but no bears or moose or elk. I stopped to climb the Athabasca Glacier, described as “a unique Canadian experience” on the welcoming sign. After a slightly strenuous 10 minute climb, I arrived at the toe of the glacier. There were lots of small rocks, dirt, some pieces of ice and snow. Call me cynical, but I had seen much the same in Antarctica and that isn’t in Canada. I left and continued on the Parkway to the entryway to Lake Louise.

Lake Louise: A sign on the highway echoed the warning that the parking lot was full, but it was 6:00PM, so I decided to see for myself. At the entrance to the parking lot, a traffic attendant (something the US parks would be well to adopt) ushered me to the second parking lot where there was a spot. Congratulating myself on my luck, I parked and walked toward the lake..….

Where I was met with hordes of tourists, all crowding around the boardwalk posing for pictures, eating ice-cream and swimming in the lake. 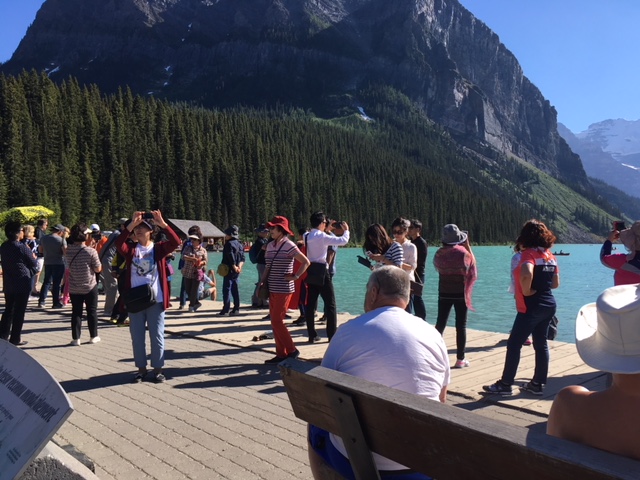 The throng of tourists was disappointing (although what was I expecting with everyone telling me the parking lot was full), but Lake Louise has 2 redeeming qualities. First, it is really, really, really pretty. The water sparkles a turquoise blue green, it is surrounded by verdant cedar trees and the Chateau Lake Louise set against the backdrop of the Rockies is majestic. 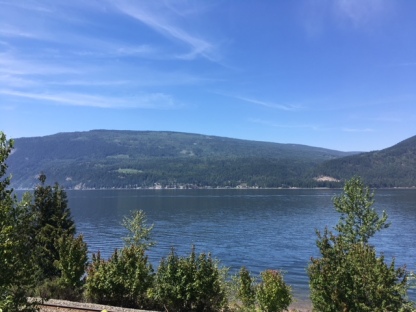 Second, there is a packed dirt path that winds along one side of the lake. It is only 2 kilometres long (both the path and the lake). I started along the path away from the immediate vicinity of the Chateau Lake Louise.  Soon the sound of the wind, the cool breeze from the lake, the rays of sunshine shimmering bright reflections removed all thoughts of the crowds. It was a worthy highlight of a lovely day.

I had been cautioned that the drive along the southern TransCanada Highway from Calgary to Vancouver would be frustrating, being single lane a lot of the way with plenty of truck traffic. It was, and there was endless construction, two separate traffic jams caused by herds of goats and obsolete odes to Stephen Harper’s “Economic Action Plan” teasingly promising to turn the 2 lane highway into 4. There was little evidence of that; only the rare passing lanes gave respite to the thousands of trucks laboring to ascend the mountains.

The state of the roadway aside, it lived up to its reputation as one of the most scenic drives in Canada (again by canadiansky.co.uk. and my waiter at the Canmore hotel where I stayed). My words cannot do it justice; I will try with the picture I took shortly after Salmon Arms where I stopped to picnic (more rotisserie chicken from Walmart).

The parks and drives were fantastic. Every Canadian should do them at least once in their lifetime.