When I first visited Australia in 1994, mention of Broome conjured up visions of a secluded tropical paradise, hundreds of miles from the nearest town, nestled between the Indian Ocean and desert outback that dominates much of central and northern Australia. Flights were irregular and expensive and tourist infrastructure was just beginning. But progress it did, and its best known attraction, Cable Beach, began to regularly appear on top 10 beach lists. I didn’t make it there in 1994, but never gave up the idea of visiting it.

Thus, fast forward to my current Australian sojourn, where I am trying to see Australia’s west coast. Daily flights to Broome from Perth were reasonably priced, wide open and just two and a half hours away. I looked at hotel prices and they seemed inexpensive for beach resorts, then looked at potential tours on Trip Advisor and things began to make sense. None of the tours were available in January. As it was the wet season, it was also the low season. Fearful of battering storms, tropical cyclones and other weather undesirables, most tourists give Broome a wide berth in January.

But not me. If I can survive a Winnipeg winter, a bit of rain and some hot weather would be a walk in the park. As I later discovered, Broome has no actual parks (but there is a golf course). I booked a flight and 7 nights at the Mantra Frangipani hotel, located just a 15 minute walk to Cable Beach.

Arriving at 2:00PM, I stepped outside onto the airplane stairs and was smacked with “the wet”. Not rain, but extreme heat combined with high humidity making me feel like I had just walked into a furnace. By the time I had walked the 30 feet to the terminal building, I was drenched in sweat and welcomed the air conditioned area by the baggage carousel. It was the start of my new mission in Broome – finding air conditioned spaces.

First, some history. Broome’s roots are found in the pearling industry, when in 1879 the then governor proposed creating a port close to the pearl grounds. Pearls formed the economic basis for the town, but led to sordid historic episodes involving slavery, imported labour and indentured servants. The pearl divers were all of the above and exempt from Australia’s white only immigration policy that was finally abandoned in 1973. Malays, Chinese and Japanese were all imported, but prized above all for their diving prowess were pregnant Aboriginal women. The overseers and exploiters were white, leading to various degrees of apartheid well into the 1970’s.

Today, pearls are still important, but farmed rather than wild oysters more prevalent. The main streets (there are 3) are lined with pearl stores and pearl museums. The oil and gas industry also contributes to the economy. Although the rigs are off-shore, Broome serves as the equipment and transport hub, with large helicopters ferrying workers back and forth to the rigs. Tourism is also big business. Cable Beach is renowned for its pristine sand and turquoise waters. It received its name when it became the Australian end point for a telegraph cable from Java in 1889. Aside from the beaches, Broome advertises itself as the gateway to the Kimberley, Australia’s outback.

The internet promotes numerous day tours around Broome in the Kimberley – to Horizon Falls, Cape Levesque, the Bungle Bungle Range, Windjana Gorge but only a few scenic and expensive (in excess of $1500) flights were operating. It was the wet, and the lack of tourists combined with the real possibility of flash floods wiping out the roads, meant most tour providers were enjoying the off season far away from Broome.

It wasn’t, however, particularly wet. The temperature regularly rose past 40 degrees by 9:00AM and cooled down only to the mid-30’s in the nights. But rain showed itself only twice during my week, once in a midnight storm and another time in an evening sprinkle, neither of which reduced the heat or cut through the humidity.

So I made the best of it. Cable Beach is beautiful, the Indian Ocean waters warm, the sand white but packed enough that walking along parts of its 22 kilometres in the mornings before the heat was pleasant. I avoided the nude part for plenty of good reasons, not the least of which involved the perceived extreme effort and contortionist maneuvers to get sunscreen all over my body. Staying clothed in calf length capri pants with a wide brim hat and giant sunglasses clearly reduced the area sunscreen was required.

Broome, with a population of about 16,000, isn’t big enough to have a public bus but a private service stopped outside the hotel once an hour between 9 and 6 (11 and 5 on Saturdays and Sundays) to take me 5 kilometres into town. I went to the grocery store (Broome has 2) and to its central business district or misnamed Chinatown. There’s only 1 Chinese restaurant in Chinatown, but a host of other ethnic restaurants. Unfortunately, most were closed for the season. The Saturday Market, run in the courthouse square, had barely a dozen stalls and all were selling either local arts and crafts or food. Sun Pictures Theatre, the oldest and longest running outdoor cinema in the world, would show films in the evening, but as they started after the bus service ended, I passed.

Feeling obliged to do something touristy, I signed up for the only thing I could find that was running: Broome Trike Tours. Its owner, my driver and tour guide was Roger, a transplanted New Zealander who had first tried his hand at ostrich farming near the Perth area. When the ostrich market tanked, he drove up north to Broome, constructed a trike costing about $50,000, and started offering tours. I was lucky, I would get an exclusive since no one else had signed up. 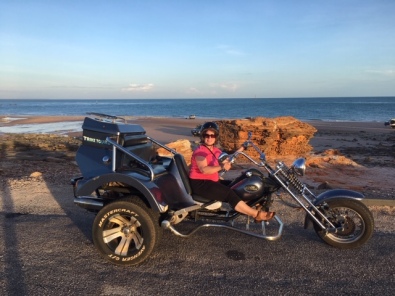 Roger greeted me, gave me a helmet and instructed me to straddle the back of the bike and off we went. It was my first time on a trike, but sitting on the raised seat at the back, I had a glorious view of the surrounds. I also got the wind full on in my face, making my lips quiver as Roger sped to 100 kilometres an hour. We started at the golf course, where a few wallabies were bouncing around chasing golf balls but were very unco-operative photo subjects. Next we drove to the sights of Broome, , through the downtown, stopping at Roeback Beach in the center of Broome, and finally to Gantheaume Pointe, to see dinosaur imprints and the sunset over Cable Beach. 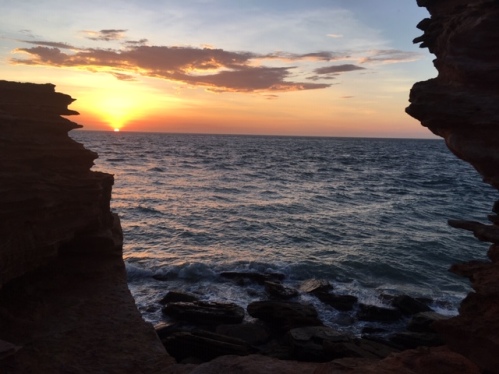 I made one more trip into Broome proper, trying to see more than just the grocery store and the outdoor market. However, with the temperature above 45 and high humidity, it was not easy to walk around. Most of the streets were deserted,  most restaurants and shops closed for the season. After an hour, I had gone through my liter of water, needed a clean t-shirt and gave up. The heat had beaten me. I took the bus back to the hotel, changed into a bathing suit and jumped into the pool.

It was a relaxing, lazy week. With so little to do, and the heat so oppressive, leaving the coolness of the hotel’s pool was a task not undertaken lightly. As for Cable Beach, was it a top 10 beach in the world? I don’t know as I haven’t visited most of the others. It is gorgeous and I loved my walks along the beach, but the high temperatures bordered on oppressive in January. I am embarrassed to admit I missed having umbrella vendors and tiki bars and people walking up and down the beach selling ice cream and massages and sand buckets. I understand that part of Cable Beach’s charm is its isolation, but for me, that is also one of its downfalls. I suspect at my next beach, I will be decrying the lack of privacy and the endless hawkers, but that is a few weeks away.

Notes: I travelled to Broome from Perth on Qantas, then onward to Darwin, also on Qantas. Both were daily, regularly scheduled flights. Daily rate for a 1 bedroom apartment hotel at the Mantra Frangipini in the low season is $100 per night. The Trike tour (broometriketours.com.au) cost $150 for a single rider, reduced to $135 for 2 or more.