Nine days on a highlights tour of the Baltics had saturated my desire to see Medieval castles, Lutheran churches and Catholic cathedrals, but Lithuania was next on the agenda and there were plenty of the above, along with Orthodox churches, both Russian and Ukrainian. I chose, instead, to focus my free time, after the standard city tours of medieval castles, churches and cathedrals, on my Jewish heritage. Both my maternal and paternal grandfathers had ties with its capital, Vilnius, so I was curious to learn what life might have been for their families in the past.

First, some history to put everything in context. Like the other Baltic states of Latvia and Estonia, Lithuania was first invaded by German crusaders in the 13th century. Unlike those other countries, Lithuania successfully repelled them, making it the last pagan kingdom in Europe. The Duchy of Lithuania ruled Lithuania, battling the Germans, Poles, Mongols and Russians over the centuries. In 1387, the Grand Duke married a Polish princess, converted to Catholicism and created the Polish/Lithuanian Commonwealth, a marriage having significant impacts for the next 450 years.

The Commonwealth prevailed until about 1522.  200 years of Russian invasions and territorial concessions followed.  In 1791, Lithuania was formally annexed into Russia where it remained until it declared independence in 1918 amid the chaos ensuing from the Russian Revolution. Unfortunately, Poland also lay claim and was granted the city of Vilnius since it was 40% Polish (and 40% Jewish). Lithuania’s capital moved to Kaunas, but emotions simmered between the Poles and Lithuania over who Vilnius belonged to. Re-enter the Russians in 1939, who promised to return Vilnius to Lithuania if it could station a few thousand troops there. Lithuania agreed, it got back Vilnius, but Russia set up a local puppet government which promptly agreed to join the USSR. So much for Independence.

The Russians began their Sovietization, deporting over 10,000 Lithuanians to Gulags or Siberia. But on June 22, 1941, the Nazis invaded and Lithuania capitulated within a week. At first, the Nazis were welcomed as liberators from the Russians, but when their motives became clear, they too became occupiers. Some Lithuanians were happy to collaborate with the Nazis; others took to the woods to become partisans or freedom fighters. The Nazis remained until January, 1945, when the Russians again annexed the country into the USSR, where it remained until it finally gained independence in 1991, but not without bloodshed. In a confrontation with Soviet soldiers at the Vilnius TV Tower, 14 Lithuanians died.

The Dark Side: Lithuania’s Jewish Heritage

Way back in the 1300’s, the Grand Duke recognized that his people were great soldiers, farmers and fishermen, but lacking in the merchant and trade department. So he issued an invitation to the Jews to come and settle in Lithuania. They came in droves, mostly from Germany fleeing the crusaders amid allegations that they were somehow responsible for the bubonic plague sweeping the continent.

They came also from the Crimea, a distinct sect known as the Karaim who rejected the Talmud. Their language is Turkic and they variously describe themselves as the real Jews or, to avoid death in WWII, claimed not to be Jewish. They worship in Kenesas, one of which we viewed in Trakai. We also ate at a Karaim restaurant there, where I had a meat filled pasty that reminded me mostly of an empanada.

Back to the history: the Jews were granted a Charter in 1388, allowing them to govern themselves, raise taxes and enforce their own laws in their communities. They had separate schools, separate churches, separate community centers. Conversations were in Yiddish, except when conducting trade with the Poles or Lithuanians. As most Jewish boys were required to study the Torah from a young age, they were literate in an age when few could read. Thus many occupied roles as trusted advisors to the noble class. Not surprisingly, this lead to jealousy amongst the locals. In addition, the independence allowed the Jews in their communities meant that they didn’t integrate with the Poles or Lithuanians, but rather lived a separate existence side by side.

The Vilna Gaon Jewish State Museum narrates this history, along with art displays by Samuel Bak, a Vilnius holocaust survivor and prodigy who had his first exhibit in the city at 9. During the Holocaust, 95% of the 250,000 Jews in Lithuania were exterminated by the Nazis, mostly taken to nearby woods and shot.  Memorials in the woods  are situated next to the mass graves.

In Vilnius itself, little remains of the vibrant Jewish culture that once thrived in the Jerusalem of the North. The Great Synagogue was bombed by the Nazis, then razed by the Soviets to make way for a school. A few signs remain, the writing in Yiddish, Hebrew and Polish. There is a plaque at the Theatre honouring the Jewish theatre group which, controversially, performed in the ghetto during the Nazi period.

Milda, the guide for the Jewish Vilnius tour was not Jewish, but a student working on her master’s thesis in Religious Studies. She took us through the streets of the old ghettos, pointing out the memorials to the victims and statues of famous Jews who had once lived there. It was only in the last decade or so, she explained, that real progress had been made to honour the former Jewish culture. During the Soviet period, the Soviets tried to quash all religious references that violated its official policy of atheism. This extended to prohibiting memorials that mentioned Jewish victims of WWII; one could only refer to victims. In the decade following Independence, the focus had been on rebuilding the economy.

But now a number of initiatives were underway to celebrate the city’s Jewish past. The school where the Great Synagogue stood is set to be demolished and archeologists are planning to excavate the huge underground ruins. Troves of books and papers, nearly 17,000 items, secreted from the library and hidden in a church for 70 years, came to light last year. And the story of Lithuania’s Oscar Schindler is being told and retold. He was Chiune Sugihara, a Japanese diplomat who disobeyed his country’s orders and issued over 5,000 exit visas to Jews, allowing them to escape Lithuania by taking the Transiberian Railway to China and onward to Japan.

Milda was blunt about Lithuanian collaborators with the Nazis and explained there was a debate going on as to how to deal with it. Some Lithuanians thought it necessary to acknowledge and come to grips with its past; others saw it as something that happened long ago which would be better forgotten. As for the current attitude, like any society, there is an element which is anti-Semitic, racist and against immigration. Lithuania (and all the Baltics for that matter) is glaringly homogeneous.  As another of my tour guides said, very few immigrants want to come here. Still another volunteered that if you were a Syrian refugee, you would probably not be comfortable here.

The Lighter Side of Lithuania

There is a definite kooky side to Lithuania, such as the bust of Frank Zappa in Vlinius. What connection has the non-conformist American musician to Vilnius? Absolutely none. He was never there; he had no Lithuanian blood in him. I heard two versions of why he had been honoured. One was a Lithuanian super fan managed to convince the city council that Zappa really was Lithuanian and deserved a bust. Another is slightly darker. Following the departure of the Soviets, local artists wanted to see how far they could push the envelope in terms of anti-establishment personalities and Zappa was the most notorious person they could think of when they submitted his name to the council to test its limits. Whatever the truth, there is a bust of Frank Zappa in the city.

Then there is the Republic of Uzupis, an artist’s quarter located in the old city. It declared its independence in 1997, and celebrates it every April 1st by demanding all visitors acquire a visa, which is accomplished by smiling. It has its own flag, currency, an army (of 11) and a constitution drawn up over a few pints of beer with such articles as People have the right to have no rights. Internet cafes, malls and kiosks are banned. The area is awash in amusing artwork and the lowest price bars in town. 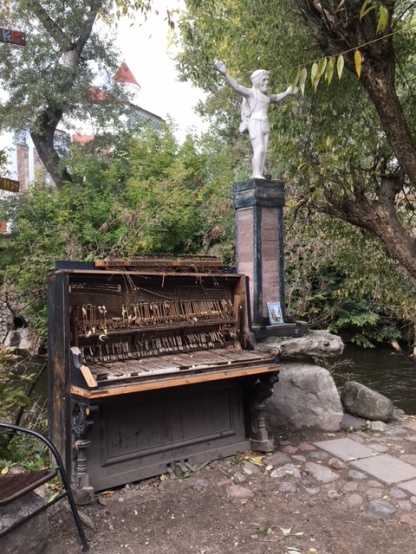 The Hill of Witches is located in a forested area on the Curonian Spit, a narrow strip of land Lithuania shares with Russia. It is exactly as its name implies, a forest trail filled with 80 wood carvings of pagan and folklore symbols. It was started in 1979 and tolerated by the Soviets so long as it didn’t contain any religious or anti-Soviet images. The figures draw on Lithuania’s long history of wood carving and are wonderfully expressive. 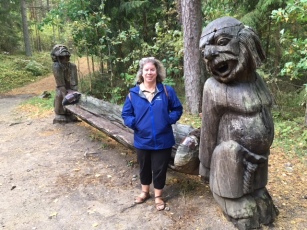 Which seems like a fitting metaphor for my thoughts on Lithuania.

One thought on “Lithuania: The Dark and Lighter sides”