My favourite attractions leave me feeling satisfied, having learned something new or made me think about an issue in a different light or provided the pleasure of seeing a beautiful sight. My visit to Biosphere2 failed on most accounts, making me feel that I had been enticed to see one thing and was shown something completely different.

In 1991 a Texan billionaire named Ed Bass teamed up with an ex-cult figure called John Allen to create a completely self-sustaining environment, with an indoor 3 acre farm to plant crops and 5 enclosed biospheres each containing a different ecological system: an ocean with coral reefs, a rainforest, mangrove wetlands, a fog desert and savannah grasslands. The technosphere was a 3 mile underground conglomerate of pipes, energy supplies and air regeneration equipment. Biosphere2 also had living quarters for 8 biospherians, a select group of idealistic men and women who agreed to spend 2 years in the Biosphere 2, relying only on the materials inside for their survival. The experiment was named Biosphere2, The Closed Mission. It is located about 45 minutes from Tucson, Arizona:

The ostensible purpose of the experiment was to prove that humans could survive for long periods of time in a closed environment, perhaps on Mars, perhaps in outer space. The biospherians, clad in their Star Trek inspired designer outfits, were paraded before the world media as they entered their airtight cocoon for two years in September, 1991 to begin their experiment.

Problems surfaced quickly. One of the biospherians had to leave the Biosphere following an injury to her hand which the medical doctor inside was unable to remedy. She returned carrying a duffle bag of materials, which the media declared amounted to cheating on the experiment. The crops inside failed to achieve their targets, leading to considerable malnutrition and weight loss of the inhabitants.

Most significantly, the plants inside the biosphere failed to photosynthesize as quickly as needed, leading to an abundance of carbon dioxide inside. The biospherians were slowly being suffocated, leading to lethargy and other ills. To resolve the lack of oxygen, outside management decided to allow external air into the biosphere, compromising the self-sufficiency aspect of the entire experiment.

Nonetheless, two years later, the biospherians emerged from their bubble and declared it a success. Time Magazine was not so enthusiastic, declaring it one of the Worst 100 Ideas of the 20th century. Current analysis of its value is split into two camps. Those who considered it as an experiment to determine if people could live in a self-sufficient environment for an extended period view it as a failure, pointing to the outside assistance needed to sustain the project. The other camp recharacterizes the purpose of the Biosphere2 as an opportunity to determine how people could live in a self-sustaining system, regarding all the problems encountered as lessons learned. They note some of those lessons are currently being applied on the Space Station and in Antarctica research stations.

However, one regards the Biosphere2 experiment, very little of it is mentioned on the current tour. Our docent, Carol, met us and ushered us into a theatre for a short video about the current Biosphere2. After the original biospherians left in 1993, a second group of 8 entered the domes, but emerged just 6 months later amid infighting amongst the management, a raid by law enforcement officials and somehow, Steve Bannon’s (the former Trump advisor) involvement. None of this was mentioned by Carol. Instead, she advised that Columbia University took over Biosphere2 initially but currently, the University of Arizona manages it.

Nor was there reference to the length of time the original biospherians spent in the Biosphere2. Carol did drop a few tidbits about the Closed Mission:

But mostly,  the tour focused on the current or anticipated scientific experiments that the University would carry out,  relating to the effects of climate change on the ocean and rainforest, matters I suspect are of less than overwhelming concern in the middle of the Mojave desert. 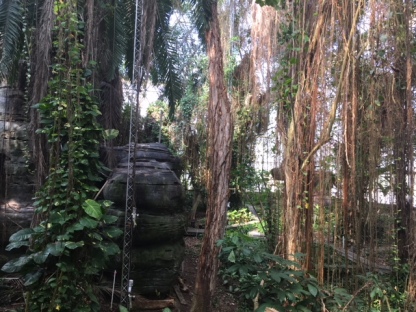 (The mock ocean and rainforest).

This is a missed opportunity., in my opinion. If the University of Arizona wants to exploit Biosphere2 and turn it into a tourist attraction, it should focus on the Closed Mission, its goals, successes or failures It could have a gift shop selling T-shirts and coffee mugs declaring “I survived the Biosphere2” and have videos of the biospherians entering and exiting. Maybe it could invite back some of the biospherians or do a sequel “where are they now.”  In any event,  I shouldn’t have to survey the internet to find out what happened to the Closed Mission at Biosphere2.

Instead, the current tour just tries to sweep the whole thing under the rug like a bad memory, an experiment poorly conceived and badly implemented. Whatever its merit, the Biosphere2 Closed Mission deserves more than passing mention on a tour of the Biosphere2.