Montenegro is a new country, declaring independence, and amicably divorcing itself, from Serbia in 2006. A third of its 600,000 inhabitants live in the capital, Podgorica. It is small (about 400 kilometers long), but contains rugged mountain peaks, forests, waterfalls, lakes and 295 kilometers of Adriatic coastline. As it neighbors Serbia, Bosnia Herzegovina, Albania and Croatia,  it has had its shares of troubles over the centuries.

Montenegrians are Serbian speaking Slavs, who emigrated to the Balkans in the 7th century. They became part of the Byzantine empire, but in 1042 revolted and achieved an independent kingdom. The kingdom existed until the mid-15th century, when Montenegro was captured by the Ottomans. It managed to regain independence in 1692 and remained more or less a self-governing state until the aftermath of WW1, when it became part of the Kingdom of Yugoslavia and, post-WW2, part of the Yugoslavian Republic. Following the break-up of Yugoslavia in 1990, it stayed as part of Serbia, thus experiencing  the global embargoes and economic crises that plagued Serbia in the 1990’s, but luckily sustained little damage from the NATO air strikes in 1999.

A dramatic train ride from Belgrade, through high mountain passes and hundreds of tunnels, until the train slowly descended into the valley brought me to my destination, the capital city of Podgorica. Although founded in the 10th century and occupied by just about everyone, it was heavily bombed during WW2 and retains little of historical architectural interest.

My walking tour of Podgorica was cancelled for lack of the minimum participants. The city is not heavily touristed, a much welcome change from Dubrovnik, but not great for group tours. Undeterred, I grabbed a map and walked towards the city centre. Fifteen minutes later, I came to the football stadium, which my map indicated was on the other side of downtown. I had walked through it and completely missed it. As I said, not too much of interest. I crossed the newly constructed Millenium Bridge, which looked very similar to other millenium bridges in Belgrade and Novi Sad in Serbia, walked back across another bridge, then walked to the old Ribnica bridge and couldn’t figure out what else to do. I went to the mall, which had lots of shoe stores, a few telephone carriers, some toy stores and food kiosks. The walk around the mall took 15 minutes. So I walked 45 minutes to the nearest laundromat, did my laundry and had a pedicure on the way back. 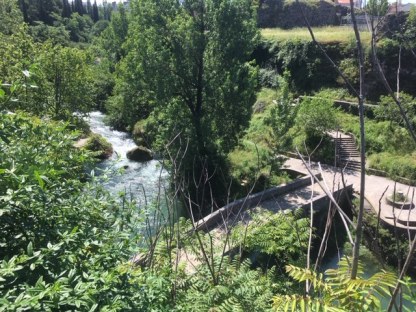 And so it went. My 3 days in Podgorica were pleasant, but unexciting.

From Podgorica to Kotor:

Podgorica is inland about 55 kilometers, but a slow drive to the coast reveals spectacular scenery and architecture that spans thousands of years. I arranged a private transfer/tour with Tanya, a local Podgorician who along with 2 friends started a travel agency. Out first stop was Lake Skadar, a mountain lake that straddles Montenegro and Albania. Popular for picnics and lazy boat rides, we instead went high into the mountains for a bird’s eye view.

The next stop was Budva,  a coastal town with an ancient centre, dating from the 9th century, with Venetian inspired buildings and Ottoman era Orthodox churches.

Our last city was Tivat, modern and  notable for its tricky-to-land-in airport due to the nearby mountains. Its harbour is routinely filled with mega-yachts and high-end retail stores abound. I found the whole place pretentious.

Kotor is Montenegro’s jewel and deservedly so. Its bay stretches from the Adriatic inland for 30 kilometers and is often, wrongly, referred to as Europe’s most southern fjord. It can be reached by a short tunnel under the mountains or a long drive along coastal towns before snaking around the bay on a single lane, curvy road following the water. We chose the latter. Tanya was underwhelmed by the towns. The first we passed, she said, was occupied mostly by Russians, laundering their money and driving up prices all over the coast. Another town was predominantly Turkish, “a safety net from Erdogan” Tanya offered. Nestled in the mouth of the bay are two islands, the natural Sveti Dorde and Gospa od Skrpijela.

We entered the walled city of Kotor. Inside are 17 churches, some right across from each other, ranging in age from the 10th century to the 20th century, mostly Orthodox. Palaces, former homes belonging to wealthy Kotor citizens, are signposted. Most resemble Venetian constuction, built at the height of Kotor’s prosperity in the 16th and 17th centuried. The inevitable souvenir shops, ice cream vendors and banks were present, along with touts offering speed boat tours of the bay. That seemed like a waste to me; the harbour should be savoured slowly, not raced past in a flurry trying to get from island to cave as quick as possible.

Above the town, a fortified wall rises steeply upwards to first, the church of St. Nikola, then to St. John’s fortress. 1450 steps lead up to the fortress and Tanya warned me it was a demanding, 2 hour climb, Unfortunately, it was the only way to see the Bay from above as the driveable Serpentine way to the view site was closed for go-cart races. I pondered the climb for about a second before deciding I could just as happily enjoy someone else’s picture of the the view on Instagram. Needless to say, I didn’t do the climb.

My pension was a peaceful 30 minute walk along the sea from Kotor centre. Not only did I not contend with the crowds and noise in the center, but my room had a balcony with a view of the bay. I spent joyous hours sitting there, watching the sunset and sunrise. On my last day in Montenegro, 2 cruise ships sailed up the bay to dock in Kotor to dump thousands of passengers on shore excursions into the city. I was not unhappy to leave.