In Ireland, I took advantage of its plethora of English language bookshops and purchased a magazine titled 100 Places to See or something along those lines, to give me new ideas about where to travel but really to count the number of places I had already seen. I leafed though the magazine slowly, on my flight to Iceland, during an insomniac episode in Paris, trying to stay awake in Taiwan but it was in Melbourne that I finally reached the last dozen recommendations in Australia and the South Pacific. Smugly, I noted I had visited Uluru, Borobudur in Indonesia, New Zealand’s South Island, but not yet Tahiti. It was the second last entry that caught my eye – a pink lake called Lake Hillier – in Western Australia where I was heading to next.

I had booked 10 nights in Perth, the capital of Western Australia, but left 5 nights open, perhaps to visit Geraldton or Monkey Mia hundreds of kilometres north on the Coral Coast of the Indian Ocean. Public transport there seemed uninviting, involving overnight bus rides and being dropped off on the highway in the middle of nowhere in 40 degree heat, hoping that a shuttle bus might appear from 60 kilometres away. Renting a car was briefly considered, but as I was still looking the wrong way every time I crossed a street, this option might prove dangerous. My search for how to spend 5 days continued.

On a whim, I dropped into the Western Australia Tourist Office/travel agency to ask whether it was feasible to go to Lake Hillier. The receptionist hadn’t heard of it, but another more experienced agent advised, yes, it was possible, but as the lake is on an uninhabited island, the only way to get there was to travel to the nearby town of Esperance and take a scenic flight to the island. Esperance was 700 kilometres away. A regional airline flew there a few times a day, but as embracing the concept of slow travel meant I was in no hurry, I opted for the 10 hour bus ride there and a return two days later consisting of 5 hours in a bus followed by 7 hours in a train. At least I would see the countryside.

So my quest to see a pink lake began. The bus ride was comfortable enough; it was only half full, the seats had USB plug-ins and we stopped at roadhouses (not rest stops but they are the same thing) every couple of hours for “comfort stops” but, said the bus driver “if you must smoke, do it at least 6 metres from the bus.” I had thought we would be travelling through the outback most of the way, so I was surprised to see that we passed through agricultural lands for the first half of the ride. The landscape eventually turned desertlike and I stared out the window, hoping to catch sight of a kangaroo or two. No such luck; they usually sleep during the day and are most visible at dusk or dawn.

We arrived in Esperance a full 40 minutes early and I made my way to the hotel, before walking down the Esplanade adjoining the seaside. It’s a typical little beach town with motels and holiday houses lining the shore, fish & chip shops galore and ice cream parlours offering the best ice cream in Australia, everything one would want in a beach town except a beach. The waves lapped right up to the stone walls and grassy parks, with little sand in sight. A pier, broken in parts and showing signs of rot, reached into the ocean. A sturdier container port with hundreds of containers stood on the other side, marring pretty pictures to the left, but the sunrise was magnificent:

The next morning, a $47 cab ride dropped me at the inexplicably distant Esperance Airport, nearly 25 kilometres from town. The taxi driver, a long time resident, had no idea why the airport was built so far away from the town – the land was quite flat and no topographical explanation was apparent. I decided the land must have been owned by the mayor of Esperance who wanted to make a few bucks, but I had no basis for speculating thus.

Waiting at the airport was Will, the counter agent (the regular one was sick that day), flight attendant and pilot. There I met my co-passengers: Francine was a psychologist from New South Wales on a road trip across the Great Australian Bight as the south coast is called, and a young couple from Switzerland.

Will walked us out to the tarmac and gave us the safety briefing: “No toilets, no drink service, seat belts must be worn at all times as must a pouch carrying life vests. Headphones were also to be worn always and talking was encouraged, except during taxi, take-off and landing.” No one had any questions, so after the obligatory photograph (Will was also the official photographer), we climbed aboard, strapped ourselves in and before my well-developed fear of flying set in, were airborne. Thankfully, except for some minor turbulence from the thermal winds where the land met the sea, it was a smooth flight and I quickly put my fears aside. 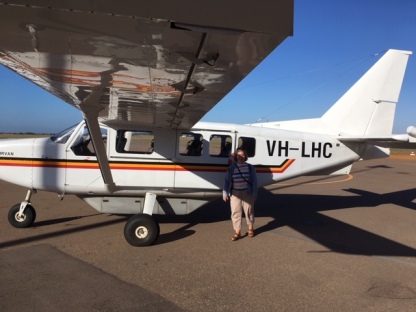 We flew first over the completely misleadingly named Pink Lake, which as one can see from the photos, is a lake but hardly pink. In fact, it has not been pink for over 10 years. Now bear with me, there really is a pink lake coming up, it is just not called the Pink Lake.

Middle Island, some 80 nautical miles away (or 85 normal miles) was our destination. At 6.5 kilometres long, it is the largest island in the Recherche Archipelago and currently uninhabited except by a few rats and wallabies. It wasn’t always so – the American and Australia’s only pirate, Black Jack Anderson, escaped the gallows and made Middle Island his base in the 1820’s and 1830’s, attacking passing ships, selling seal skins and keeping an harem of Aboriginal ladies as sex slaves. He is thought to have died and been buried on the island.

Our 40 minute flight flew over some of the most spectacular blue waters lapping up against the whitest sand beaches in Australia. What Esperance lacks in beaches is made up for along the coastline. Silky, pristine sand greeted by rolling waves beloved by sun seekers, surfers and whales alike tucked into horseshoe shaped bays lined the coast.

Then Middle Island came into view and we could see Lake Hillier. Not a pale, greyish tinged red or sienna pink but full on, bubble-gum pink. It can only be described as Pepto Bismol pink. I will let the pictures do the talking: 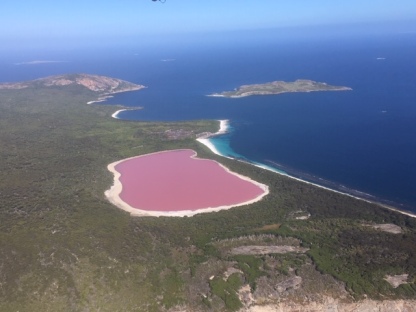 Will provided commentary about the lake. Its name derives in memory of a sailor aboard The Investigator, a ship which visited the island in 1802 and 1803 whose captain first recorded the existence of the pink lake. The pink  is natural, caused by a bacteria – the scientific name is Dunaliella Salina according to Wikopedia- which interacts with the extreme saltiness of the lake to emit a red dye and give the lake its colour. The lake is the second most salty lake on earth, after the Dead Sea. As a result, it doesn’t support any fish life or much of anything else. Drinking the water is not dangerous, but given the high salt content, not pleasant. It is, however, expensive. A fine of $10,000 is imposed for going into the water and a further $10,000 for taking water out of the lake.

It is possible to visit Middle Island by boat, but it is a 5 hour ride from Esperance, each way. A scenic helicopter service had operated a tour there a few years ago, but after it stranded a group of Chinese tourists on the island following mechanical and financial issues, that was the end of that.

After a few loops and turns over the lake, we started back towards Esperance. One last surprise awaited – a green lake called Woody Lake – to complete the rainbow of colours.

I often wonder why I enjoy travelling so much. The trip to Esperance and the flight to Middle Island encapsulates it. My time on this planet is limited and I want to see as much of it as possible. Lake Hillier, for me, was one of those miraculous beauties that allowed me to marvel at all the wonderful, diverse sights made by Mother Nature. It makes me feel lucky to be alive and to be able to enjoy these amazing locales.

If you are thinking of going, the bus/train fare from Perth via TransWA cost AU$263 (all costs incurred in January, 2019). It takes about 10 hours on the bus or 13 hours by bus and train. The scenic flight by Goldfields (goldfieldsairservice.com) cost AU $370 for a two hour flight, minimum 2 persons. I stayed at the Best Western on the Esplanade costing Cdn $148 per night (booked on expedia.ca) in high season.