For better or worse, my first impressions of a country are often lasting ones, which is why taxi drivers who pick up passengers at airports or international train terminals should quit trying to rip tourists off; do they not understand how awful a first impression they make? Which leads me to Norway. I was heading to Bergen, but since I was feeling slightly guilty about what a bad environmental footprint my business class flight to Denmark had left, I forewent the quick, 2 hour flight and opted instead for the much more environmentally friendly, politically correct, 2 days on a train.

My train ride to Oslo began in Copenhagen, going through a tunnel under the Oresund Strait to Sweden, arriving late in Gothenburg; too late to grab a bite to eat at the station, before catching another train to Oslo. Once on it, the immigration officers barely glanced at my passport before grilling the younger Spaniard beside me about why she was going to Norway and the equally young Swedish fellow about his means of support. I’d like to think their disinterest in me was due to my Canadian passport but I suspect it had everything to do with my few grey hairs and wrinkles.

The train arrived in Oslo 45 minutes late to a pounding rain storm, at 10:30PM, with many apologies by the train staff (for being late, not the rain). Google Maps said the hotel was a 7 minute walk from the station and as I had no Norwegian cash to pay a cab driver (little did I know that everybody and everything takes credit cards here), I put on my raincoat and started walking in what I hoped would be the correct direction. Luckily it was, and equally lucky, Oslo and the whole of Norway, is extremely safe. Despite my vulnerable state, dragging a suitcase whilst staring intently at a phone trying to follow directions, I felt no fear walking around central Oslo at the late hour. I arrived at my hotel 15 minutes later – I have no idea how Google Maps figures out its walking time, but I am always about twice as long as what it says it will take – and checked in.

No restaurants were open in the vicinity and I hadn’t eaten since lunch, so I asked the hotel clerk if, by chance, there were some biscuits or cookies I could have. She told me to wait while she checked in the kitchen. She came back a few minutes later with a plate filled with a piece of cake, a cut-up orange and some mini-croissants. How to make a great first impression!

To Bergen and The Flåm:

A bit of a confession here. The real reason I was taking the train to Bergen has nothing to do with my environmental sensitivities (or lack thereof), but my desire to take a ride on what is often described as one of the most scenic train rides in the world, The Flåm. I could have done it from Bergen, but that would have involved a flight and an expensive day trip and I was in no real hurry and always anxious to save a few dollars. So I booked a 4 hour train ride to Myrdal station where I would ride the Flåm Train to Flåm and back again before catching another train for the 2 hour trip to Bergen.

The train to Myrdal was comfortable. The buffet car had extra large windows, where I spent time admiring the scenery – all trees and mountains and lakes. To my chagrin, snow was visible atop a mountain, but it turned out to be a glacier so snow even as early as September 8 was not unexpected.

The Flåm railway starts at the Myrdal station and runs for 20 kilometers, descending from 867 meters above sea level at a 5% gradient, whatever that means. It is steep. There are 20 tunnels, 10 cute little yellow stations and a viewing platform at the largest waterfall. More waterfalls, a glacier and beautiful Norwegian woods are passed during the hour long journey down; speed not being of much importance. 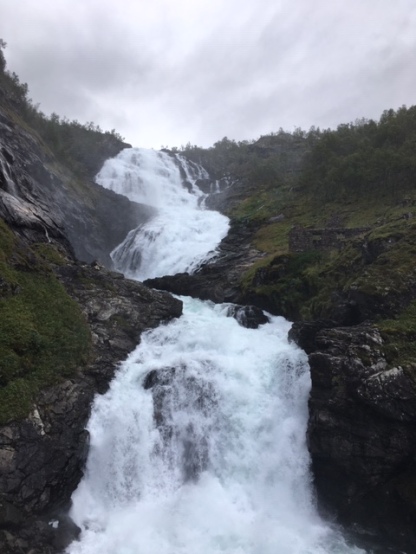 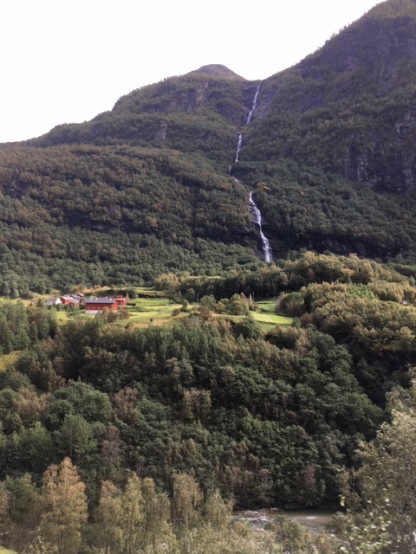 On schedule, an hour later, we arrived at the town of Flåm, a Mecca for outdoor enthusiasts with hiking trails, cycle paths and fishing among the attractions. None interested me, so I stayed on the train and went back up again. 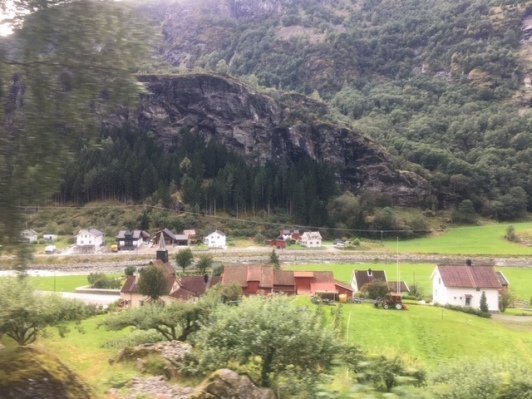 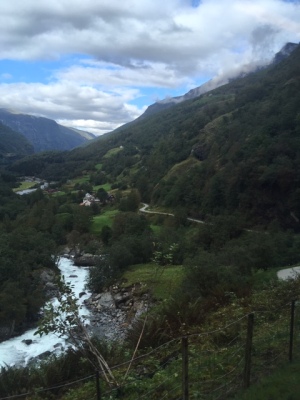 Located on a fjord inland from the Norwegian Sea and surrounded by mountains, Bergen is a spectacular city. The Gulf Stream keeps it warmer than its altitude would suggest, but with that warmth comes rain, a lot of it. Bergen is known as the rainiest city in Europe, with over 200 days of rain every year.

By some miracle, I managed to be in Bergen for 3 days without any rain, so I was quick to take advantage of the sun. First up, a 6 minute ride on the Floibanen funicular to the top of Mount Floyen to enjoy the views. I was fortunate to buy my ticket on-line, allowing me to skip the already long purchase line and save $.50 on the $14.00 fare. The funicular was full, but the views made the ride worthwhile.

Going down, I managed to snag a front row seat with a pair of Calgarians, who had just finished their cruise. Bergen is a popular stop on Baltic cruises and 2 ships were always in port when I was there, along with their crowds and guides holding a stick with a number at the top. By the time I got to the bottom of the funicular, the line-up snaked for a block and probably 1,000 people were waiting.

Next stop was the intriguingly named Leprosy Museum, but it was closed as of September 1, whether for the season or renovations I never discovered. Thus thwarted, I walked to the port area, known as the Bryggen, where food stalls were set up offering all manner of Norwegian food, including reindeer and whale burgers. The prices were frighteningly high: a salmon, potatoes and vegetable plate cost upwards of $40, while the more expensive shrimp and crab dishes started at $75 and went up, all for essentially a fast food experience. Norwegian prices were bringing out the cheapskate in me. I ate a hearty (and included with the hotel room) breakfast, took a few oranges for lunch and managed with a hot dog for dinner costing about $9.00. Back at the Bryggen, a public toilet cost $2.00, credit cards only.

I can chintz on food, but don’t mind spending money on museums and guides, so I happily parted with $25 at the Hanseatic Museum to wander the museum and take a guided tour.

Now for the inevitable history lesson as told by the guide. Bergen has been populated since the Ice Ages, but its claim to historical fame is as one of the main centres of the Hanseatic League, north German merchants who set up trading routes throughout Europe in the Middle Ages. Bergen’s attraction to them was stockfish, dried cod from the northern Lofoten islands, which could be stored for up to 30 years, useful as far away as Portugal when their crops failed or their catch was bad. In return, the Lofoten fishermen needed grain, since none grows that far north. It was a perfect match.

The Hanseatic merchants set up their own communities and followed very strict guidelines. By the 14th century, they had set up in Bergen, living communally in wooden houses on the dock. The area was fenced, only men were allowed in. Wives and children remained in Germany. Marrying a Norwegian woman was forbidden, not for morality reasons (the brothels were located on the other side of the fence) but to ensure potential heirs were German. Apprentice merchants learned to read and write and lived in dormitories. None of the houses had living rooms or kitchens, instead meetings were held in assembly halls, where the Hanseatics socialized, prayed and ate together.

Today, the houses, passageways and assembly halls standing date to 1704, rebuilt after a devastating fire in 1702 and are an UNESCO world heritage site.

Although it has been only 3 days, I am loving Norway, except for the prices. Beautiful scenery, clean, and modern, everyone speaks fluent English. More importantly, everyone seems kind and patient and happy. If you don’t have a train ticket, no problem, the conductor will sell you one. Looking lost? Someone will ask if you need directions. Hungry? They’ll find food for you. My hotel has free laundry – just ask at the front desk for detergent. No one seems to be in a hurry; someone asked me to cut in front of him at a hot dog stand.

I suspect it is because this is a very wealthy country (it has the world’s largest sovereign fund from its oil and gas revenues) with a generous social net. It is also mostly middle class, with very few poor or obscenely wealthy people. Trains have only second class cars and there aren’t many homeless people or beggars. I’m sure there are studies done by someone that shows Norwegians are very depressed or have the highest divorce rate or something awful, but this is the first country I’ve been to in a long time that I have felt I could live in. But only for 3 months of the year because it is bloody cold and wintery for the rest of the time.