Perth lies inland from the Indian Ocean, 22 kilometres upstream on the Swan River and about 3400 kilometres from the nearest city of any size- Melbourne – which is why it is known as the world’s most isolated city. It is clean and modern, blessed with a Mediterranean climate, abundant agricultural land nearby and rich, grape growing soil. It and the surrounding towns sport a population of 2,000,000. Culturally, it boasts art museums, libraries, sporting facilities galore and a vibrant Aboriginal community. The wide, gentle flowing Swan River divides the city in half, providing ample opportunity for all manner of water sports: kayaking, sailing, jet skiing, paddle boarding etc. along with pretty bridges and a ferry service traversing the river every 30 minutes, taking 7 minutes from dock to dock.

I spent my first day getting oriented and seeing the sights. Compared to the European cities I had just visited filled with centuries old palaces and architectural styles from Gothic to Art Deco, Rococo to Renaissance, Perth was a tad one dimensional. A few mid-19th century churches, a couple of colonial facades, a few buildings that would not look out of place in the American west, but mostly just modern skyscrapers sporting familiar names like KPMG and PWC and Rio Tinto. The downtown area was fairly contained, just a half dozen blocks in any direction and the typical Australian pedestrian walkway with global stores: Zara, Gucci, Uniqlo. A convention centre, a few malls, the central transportation terminal, restaurants offering food from Thai (really big in Australia) to ribs to mango juicers. Nothing spectacular or mind blowing, but everything I could want,

Whatever cultural or historical shortcomings Perth has, it more than makes up for them in outdoor activity opportunities. Anything to do with water sports is possible, although surfing and paragliding were better done on the Indian Ocean. For me, an avid cyclist, I was anxious to get out on a bike and peddle away. This is not as easy as it sounds as Perth lacks a bike share program. It has a bike rental company, conveniently located on a bike path, inconveniently located a taxi ride or 3.2 kilometre walk from the center of town. Fortunately, my hotel had a couple of bikes for rent, so on I hopped.

My first ride was a “getting to know the rules of biking” in a strange city. Unlike in Mexico City, I didn’t have to write a test, but also unlike Mexico City, the biking is the same as the driving, on the wrong side of the path/road. So my first few turns were tentative, reminding myself to look both ways and stay to the left. Likely in the expectation that non-Australians and non-Brits would use the paths, they were generally marked with arrows reminding me which side of the path to stay on.

And what glorious paths! Not the share the paths with pedestrians or little lines on the side of road, but totally segregated paths in a sienna colour lining both sides of the river. Signs reminded pedestrians that they had separate paths and when cyclists and pedestrians did have a single path, there were both asked to share the paths.

I quickly developed a daily routine, cycling across the river to South Perth, then taking the path along the Swan River for about 10 kilometres to the Garrett Street bridge, returning to North Perth all on segregated paths except for a few blocks right in the Central Business District. Stunning views of downtown Perth lined the paths, as did small ponds home to familiar and exotic birds: pelicans, cormorants, ducks, lorikeets, cockatoos and black swans.

When watching birds became tedious, the waterfront provided art works, cultural objects and just plain fanciful objects on which the eyes could feast: 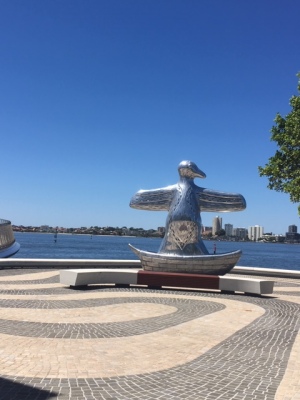 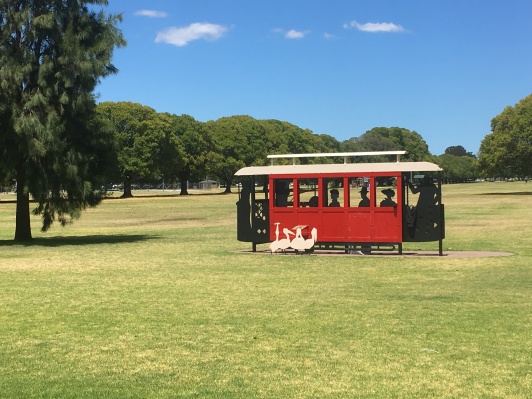 My favourite aspect of the cycle paths, although these were not limited to cyclists, were the ever present drinking fountains located every few hundred metres, most of them equipped with 3 faucets – one for adults, one for children and one for dogs. 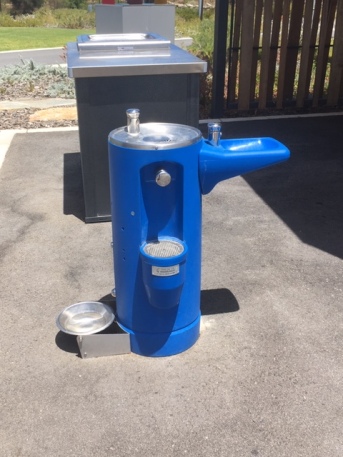 Anxious to beat the heat one morning, I left at 7:00AM for Freemantle, 22kilometres down the river on the Indian Ocean. I had seen a cyclopath, as they are called here, along the river I hoped would take me all the way to the ocean, but after 10 kilometres, the path left the river and meandered through a residential district, filled with multi-million dollar homes all straining for a water view. The cycling was easy – smooth path, gentle climbs – and the cars never turned right (or more likely left) in front of the bike, forcing me to slam on the brakes. Eventually the path ended and I turned onto the misnamed Stirling Highway, which is not a highway but a major thoroughfare. No bike path was evident, but then I caught sight of another wonderful aspect of Australian cycling – a sign on the sidewalk telling cyclists to share it with pedestrians. How different from Toronto, where the signs threaten cyclists with fines for being on the sidewalk.

After a few hours, I got my first glimpse of the Indian Ocean, at Mossman Bay:

Views of Freemantle were less impressive; it was a major container and cruise ship port. I walked and cycled around its downtown , but found little that interested me. Another pedestrian street with lots of coffee shops, take-out sushi stores, an abundance of backpacker’s hostels and a giant customs house. It was barely 10:00AM but the temperature was already over 30 and I didn’t have the energy for a 2 hour bike ride back, so I took the easy way out and went to the train station to see if I could take the light rail train to Perth. As in all the transit stations in Australia, I was greeted by an employee wearing a yellow vest:

“Yes, can I take the bike to Perth on the train?”

“Sure, just buy yourself a ticket. Do you know how to use the machine?

Which he did, showing me, then doing everything except paying. No guessing about how many zones I was going or whether to pay cash or charge card or which platform the train was leaving from. A live human telling me everything I needed to know. Another thing Toronto would do well to adopt. I walked the bike on to the train-no stairs or  escalators and a bike gate to avoid narrow turnstiles. After a 15 minute ride, I was back in Perth.

I spent 13 days in Perth, mostly going for bike rides and walking around. It’s a beautiful city, but not exactly what I would describe as exciting. It was a great place to visit, probably a wonderful place to live and raise a family, but having seen the sights, not one I would likely return to on vacation.

Next stop: one of the best beaches in the world – Broome.