After attending a scrapbook convention in Edison, New Jersey, I headed to Philadelphia. I had  low hopes for this city – I was visiting simply because I had never been there and was curious. Initial impressions were negative when my downtown hotel booking advised of the US $45 per day parking charge. Outrageous I thought, but the daily rate at the airport was only $8, so I parked there and took the shuttle to the terminal to catch the train downtown.

I stood by the ticket machine and, to my surprise, a young man in a transit uniform came up and asked if I needed help using the machine. I looked at the instructions: “pick station, insert cash or card, then press button and take ticket and receipt.” I thanked him and said I thought I could figure it out. Which I could-no strange “what zone are you going to?” issues or “one way, return or 3 day” multiple choice questions. Within seconds, I had my ticket and went to the track. The train arrived 10 minutes later and a live conductor validated my ticket with a hole punch. No strange turnstiles or validation machines or other odd contraptions waiting to trap unwitting tourists into doing something wrong. Just employees happy to help. Maybe I would grow to like this city.

30 minutes later I was at my station. Well marked, easy to read maps guided me along the short walk to my hotel – maybe not so hard since the city is mostly on a grid, but a welcome change from Toronto’s incomprehensible Path signage. There were many sights along the way – the City Hall is impressive and statues adorned the streets everywhere, with helpful plaques advising who the statues are and why they were there. Ben Franklin was popular; that was to be expected: 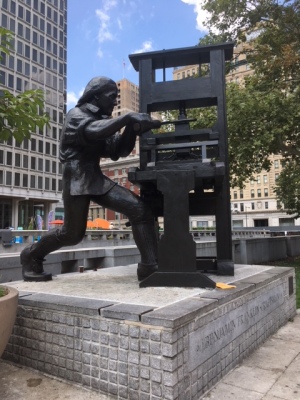 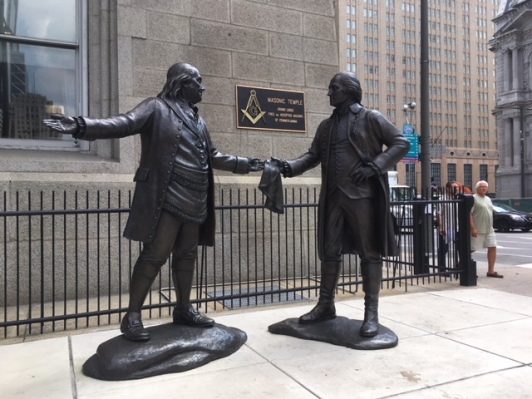 Rodin’s Thinker and the tribute to Copernicus (the earth is rotating around the sun) were less obviously connected to Philadelphia. 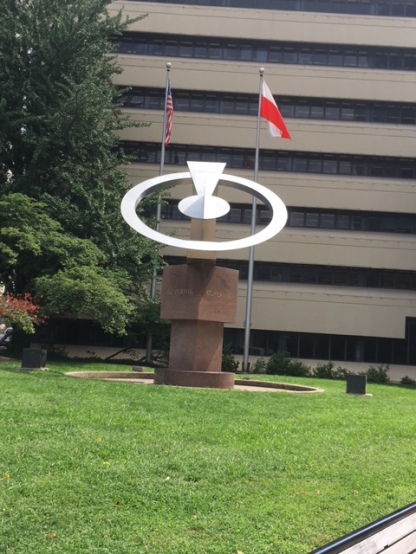 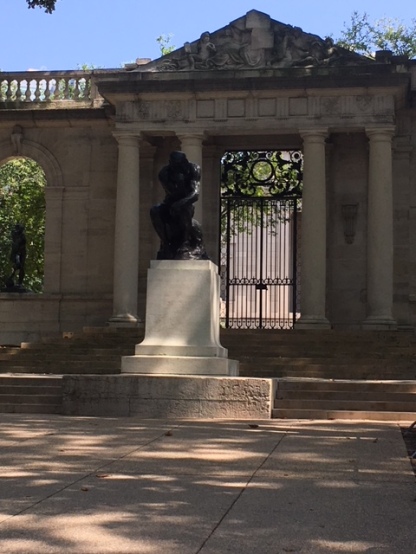 When I read the plaques, it turns out that Philadelphia has the largest Rodin exhibit outside of Paris thanks to the benevolence of Jules Mastbaum, a Philadelphia movie magnate who donated his collection to the city. The homage to Copernicus was a donation by a Polish-American group to honour the 500th anniversary of his birth.

As this was Philadelphia, I felt compelled to visit Independence Hall, where the Declaration of Independence was drafted and proclaimed, along with various other important documents (the Constitution, etc.). Tickets to the Hall are free, but timed, so in between receiving the ticket and the tour, I went to visit another icon of the US- The Liberty Bell. After successfully passing through security, I walked through the placards explaining the struggles of the US to obtain its independence and the significance of the Liberty Bell. It was a refreshingly sympathetic discussion of the early settlers’ attitudes and actions towards the Native Indians and the slaves, to the point of suggesting that they were wrong. Clearly, I was not in the south anymore.

I finally got close to the Liberty Bell- it is protected by railings. Let’s just say it is a bell, with a very large crack in it. It may represent liberty, independence, freedom etc. to some, but to me it was just a bell with a crack in it. 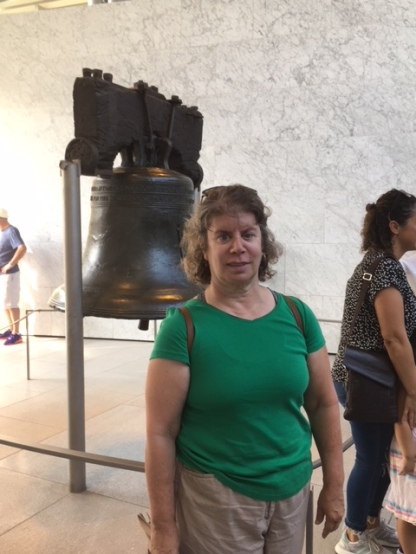 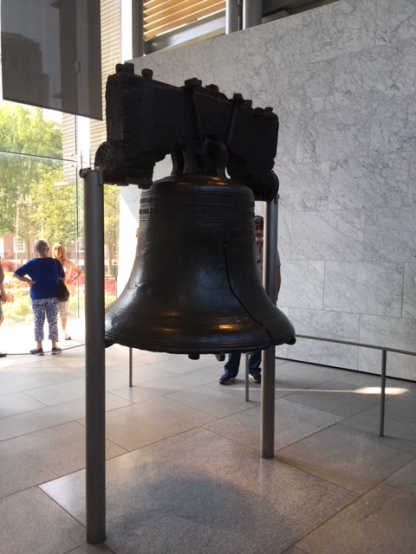 Likewise, Independence Hall. The ranger led free tour provided the context for the US colonies’ revolts leading to the declaration of independence, along with the events prior to the July 4th declaration and the personalities involved, but at the end of the day, Independence Hall consists of a few rooms, one set up like a courtroom and the other with the round tables where the signatories debated the wording and put pen to paper. 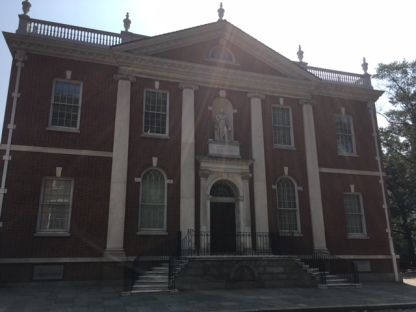 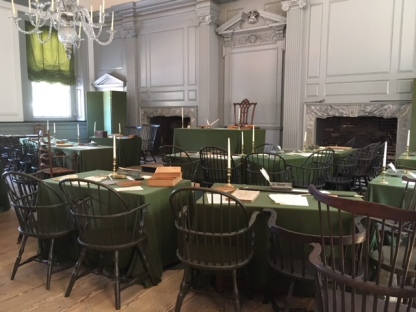 There are other museums and houses dedicated to various 1776 celebrities; The Betsy Ross House, The Franklin (Science) Museum, the house where George Washington lived, but I felt I had done my share of historical sightseeing. Next stop, a foodie tour.

Unlike some cities, Philadelphia’s food scene can be visited in a single stop at its Reading Terminal Market. Filled with over 100 merchants selling produce and counters selling cooked food, it is a glorious hodgepodge of every type of food imaginable, with one glaring exception-no chains. A number of counters sold the famous Philly Cheesesteak, a hot dog bun filled with beef, cheese, peppers and onions. Delis, Indian, Shawarmas, sushi, ribs, ice cream, Greek, Italian, cookies, burgers, an oyster bar, Thai, Chinese, everything one could want to eat, was on offer here. Conveniently located just a 10 minute walk from my hotel, it became my go to place for every meal. 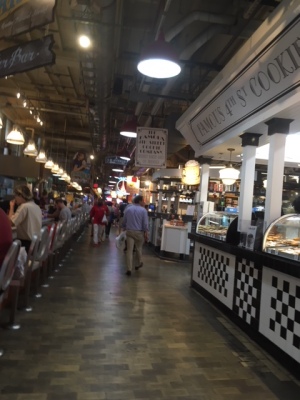 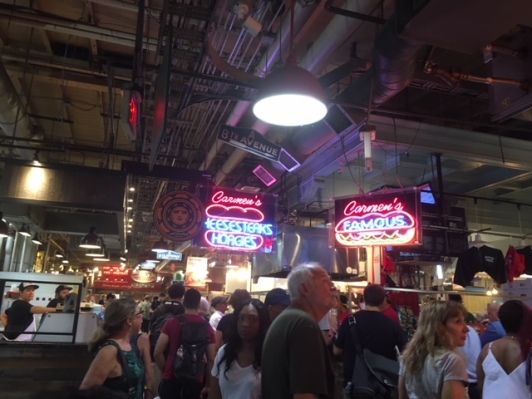 On my last full day here, I did what every visitor to Philadelphia must do- re-create Rocky’s run up the 73 stairs at the Philadelphia Museum of Art and turn triumphantly to the city with arms raised high. When Sylvester Stallone did it, I suspect the temperature wasn’t north of 35, there was no scaffolding obscuring the stairs and he hadn’t endured a two mile walk through an obstacle course of construction, homeless people and more statutes. I did, and approached the building hot, sweaty and in no mood to run up those steps. I wasn’t even a big fan of the Rocky movies.

Fortunately, as in everything else, Philadelphia has considered the tourist. It probably didn’t want to face liability lawsuits from middle aged tourists suffering untold injuries racing up the stairs. The statue (yes, another statue) of Sylvester Stallone/Rocky was not where one would expect it –at the top of the stairs- but in the shade just to the right and at the bottom of the stairs. With a giant sigh of relief, I asked another tourist to take my picture, raised my arms high, just because, and left. 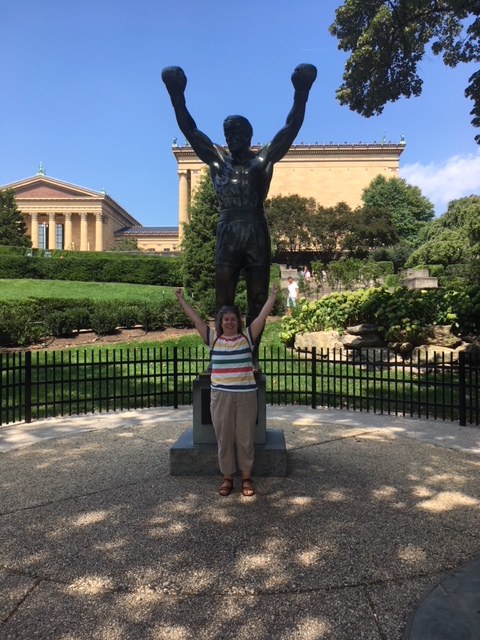 I am leaving Philadelphia happier for having visited. Next is Toronto for a week before flying to Sweden. 6 nights there, 2 days in Helsinki, a tour of the Baltics before finally settling in Paris.

One thought on “The City of Tourist Love: Philadelphia”