Three weeks of constant touring in Central Asia followed by 5 days of intensive sightseeing in Lebanon and 4 days of a slightly more lighthearted visit to Liverpool had left me exhausted, and, quite frankly, “toured out.” I needed some relaxation and non-touring time. Thus, I signed up for a repositioning cruise on the Britannia, sailing across the Atlantic from Southampton to Antigua in the South Caribbean starting October 26th.

A “repositioning cruise” occurs twice yearly when the major cruise ships traverse the oceans between the Mediterranean Sea, which they ply in the summer, to the Caribbean, where they sail during the winter months. These cruises lack the nearly daily stops at different ports, given the paucity of land between Europe and the Americas, but instead hold the promise of long, lazy sea days. Thus, this post is less about the sites I saw (aside from sea, clouds and sky, there were none), and more about spending a lot of time doing nothing.

After an uneventful train ride from London to Southampton, I enter the cruise port, where my photo is taken, the all-important authorization is done on my credit card, my passport is confiscated to the end of the cruise and my bags scanned for alcohol infringements. I had only 1 bottle of Prosecco, the allowable BYOB. All other alcohol must be purchased at highly inflated cruise ship prices.

I had splurged on a balcony cabin, not particularly appealing in the cool, rainy weather but as I stand outside as we depart, I pop open my Prosecco and toast England good-bye. Or so I thought…..

All the Brits have been in the bars since 9:00AM watching the world rugby matches, especially England beating Australia to make the finals. It appears I am the only non-British person, of a total passenger count of 3769 aboard unless you count the Welsh couple I met. I suspect the Brits would take offence at suggesting a Welshman is not British.

The breakfast buffet offers the full English breakfast (eggs, sausage, bacon – the proper kind, not the thin little strips we call bacon back in Canada), fried tomatoes, mushrooms and toast. Healthier dishes are available, but nothing remotely Oriental or Asian. Come to think of it, I haven’t seen any Asian tour groups on the ship.

The rain, winds and cool weather make sitting on the balcony or finding out where the promenade deck is undesirable, so I decide to learn how to play Bingo. One of my dinner mates, Catherine from Liverpool, agrees to show me how. “Huh?” you may ask, “surely you know how to play Bingo!” I do, but this is British bingo with 90 numbers and only 3 long horizontal lines. I spend 12 pounds for 5 cards, 2 pounds for a dabbler and win nothing after the half hour session ends. I console myself with 3:00PM tea in the buffet, featuring, of course, scones, clotted cream and jam.

TV screens and bars are all over the ship and every single one of them is devoted to (British) football. Sunday is football day in Britain and being on vacation at sea doesn’t seem to be a reason for anyone to miss their weekly football fix. The bars are full with drunken football fans, conversation at dinner is devoted to football and the one guy I talk to at the singles mixer goes on and on about football even after I told him twice I don’t follow British football. I escape the mixer and the bars and drink copious amounts of free champagne at the captain’s welcome party. It’s about the only free thing on this ship, except for the bathrooms and the minuscule chocolate square the steward leaves on my bed each evening.

Internet on board the Britannia is expensive ($40 for 24 hours) and unreliable. I know this in advance, so being cheap and anticipating being internet free for first 3 and then 5 days at sea, I had downloaded 80 videos on YouTube, 16 series on Netflix, a few Amazon Prime shows and hundreds of hours of podcasts. Not quite downtime, but definitely disconnected.

By day 4, I am itching for news so I turn on the TV and check out the 8 channels available on board: BBC News, Sky News, 2 British sports channels, a British game show channel, and 3 British drama channels. I turn to BBC. Brexit headlines the news, Parliament voted in insufficient numbers to trigger a December election. The newscasters analyze this development for 29 minutes, before devoting the final minute to other, non-Brexit news. The situation was no better on Sky News.

One of the bars features a quiz, based on a British show called Pointless. I am tempted to test my intelligence in one of the many quizzes happening on board, but they are all British based: British history, British TV, British geography, etc. so I pass. 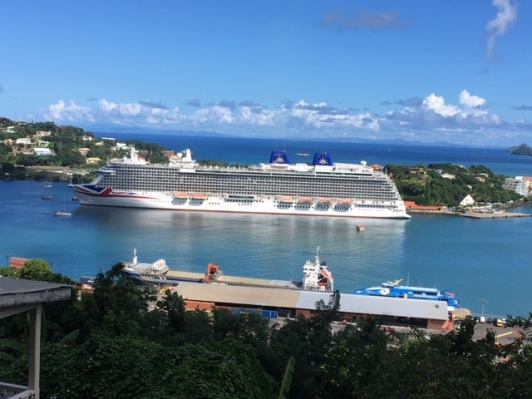 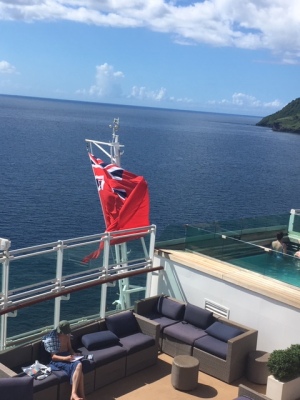 I become one of those persons I hate, a member of the horde of cruise ship passengers who descends on a port for a few hours in search of an authentic local experience. In protest, I decline going on a shore excursion pretending to show off the best Madeira has to offer, but really designed to separate passengers from as much of their money as possible. Instead I leave the port, following the very helpful giant footsteps painted on the sidewalk directing people to the town center, past the stalls selling of fridge magnets and cheap t-shirts, past the taxi-drivers, the hop-on/hop off buses and the bicycle rickshaws, walking 2 kilometers to the center of town to check out, but not stopping in at, the CR7 museum devoted to football, and a statue of Renaldo, the soccer player, who was from the island. I am on a mission: the internet. No Starbucks in sight, but the park across the port offers free wifi. I log in, read my mail, reload my expired YouTube and Netflix shows and am happy.

One of the things I dislike about the Britannia is, unlike other ships I’ve sailed on, the promenade is not on a lower, covered deck encircling the ship but instead occupies a small, separate place on the top, at deck 18, completely open to the elements and surrounding a dodge ball field and 2 golf swing nets, with sun beds on both sides and overlooking the pools. It takes 7 laps to make a mile, in the 27 degree heat of the tropics with the sun glaring down, wind blowing me all over and sunbathers jumping up and down as they get drinks, go to the bathroom or chase after hats the breezes sweep away. The noise from the steel band playing on the pool deck permeates my earphones and disrupts my podcast every time I walk on the side near the pool.

Needless to say it is not ideal for walking but the only other alternative is hiking along the narrow aisles between the cabins, so I try to make the best of it. It will be a perfect opportunity to people watch, with all the sunbathers about, but some generalizations soon became apparent. Apparently Brits love their tattoos, which are displayed in all their glory on bodies clothed in too skimpy bikinis and swimming trunks, all looking really bad on 80 year old droopy, wrinkly skins. Too many women who shouldn’t wear bikinis expose vast rolls of flab bouncing about with every wave and the majority of  men over 20 possess gigantic beer bellies, but at least I don’t see any in speedos. Most are sporting sunburns, only a few teenagers are what I describe as well-toned. By and large, it was a disheartening display of decades of excess sugar, alcohol and a lack of exercise.

In this another unexciting sea day,  I manage 42 laps, watch 1 movie, 3 hours of YouTube, 4 hours of podcasts, attend a lecture about British serial killers, this one about the Rillington murders, but congratulate myself for multitasking, listening to podcasts as I do my laps.

Another relaxing day (Day 7, at Sea):

I watch 2 movies, 3 hours of YouTube, listen to 3 hours of podcasts and complete 29 laps around the promenade deck. Swells were down to 2-3 meters, the breeze was light and the temperature is 27. A lecture on the validity of the insanity defence in murder cases with reference to the Yorkshire Ripper was well presented, but I pass on the Blackjack tournament and the Adele tribute show. In the only non-British reference in the hour long BBC newscast, a fleeting mention was made to baseball, where the Nationals beat the Astros to win the World Series.

On some ships, the food is one of the highlights. Not so on the Britannia. While the menu is specially created by a world renown chef, it is decidedly British: roast beef with Yorkshire pudding, steak and ale pie with mashed potatoes and mushy peas and fish and chips. Everything is slightly bland and cooked either well-done or very well-done. I long for sushi or Pad Thai.

Time stops for no man, except British rugby fans (Day 8, at sea):

Jet lag does not happen on repositioning cruises. Instead of quickly gaining or losing 6 or more hours such as would happen on a long plane ride, cruise ships take the gentler approach of turning the clock back every day or so. Thus, an extra hour is gained on Britannia on days 5 and 7. The ship is scheduled to gain an extra hour on Day 8, but the start time for the World Cup Rugby Final, with England vying for the title, would be the ungodly hour of 6:00AM. This wouldn’t stop the pubs from being full and serving alcohol but somebody high up decided to delay the time change to Day 9, to give everyone an extra hour of sleep, completely nonsensical as the game start would be 8:00PM Tokyo time regardless and people on the ship would only look at a different time on their clocks, not gain an hour of sleep. But it raises an intriguing question. If the Britannia was running parallel with a non-British ship which had moved its clocks back, what time would it be?

The Rugby World Cup final game began at 7:00AM on the ship. By the time I get out of bed and move about the ship 3 hours later, the UK had lost to South Africa and most of the Brits aboard, probably about 3,000 of them, were both downing their sorrows in beer and settling in for a full day of football in the bars.

I walk 42 laps, attend another what I now refer to as “Murder of the Day” lecture, watch 2 movies, listen to 4 hours of podcasts and eat 3 times.

Football in the UK has gone from a Saturday ritual to a near daily ordeal, with games available to watch 7 days a week. So it was no surprise most of my fellow passengers were again glued to the TVs in the bars. A few hardy souls attend the last of their daily dance class in the lounge and the Murder of the Day lecture is so well attended that a second session is added, an expose of the Evans brothers, a pair of notorious British gangsters who made the Mafia look like kindergarten kids.

Late in the evening, as I sit on my balcony, I see, for the first time in 5 days, something other than sea, sky and clouds. A jetliner flies overhead, shattering the monotonous sound of waves gently splashing against the ship. Tomorrow we make land in Antigua. I look forward to connecting on the internet after a 5 day absence.

Next: A Caribbean Port a Day