The second Baltic country on our tour’s itinerary was the smallest- Latvia – sandwiched between Estonia and Lithuania. It shares a history with Estonia: invaded by German crusaders in 1202 who captured the land, converted the pagan tribes to Christianity, then spent the next 750 years battling, in no specific order, the Danes, Swedes, Russians, Germans and Poles, before being granted independence in 1918. That was short lived, as the Soviets invaded again in 1940, retreated when the Nazis marched in and occupied Latvia, then became part of the USSR in 1945 until independence was reasserted in 1991.

Given its history, it is not surprising that its main tourist attractions are religious (Catholic cathedrals, Orthodox domed churches and Lutheran churches) and the remains of medieval castles and walls, mostly restored after centuries of neglect and bombings during WWII. Our first stop covered all bases, at the “beautifully restored” 14th century Castle of the Livonia Order at Cesis and another across the valley at Sigulda. 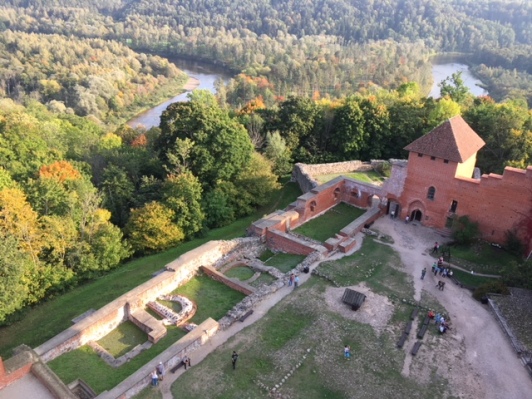 At least the town had a sense of humour when it came to statuary:

The capital, Riga, was the next stop. The landmark building was a gift from the Soviet Union, a testament to Socialist architecture and nicknamed “Stalin’s Birthday Cake”. It was almost an exact replica as the one in Warsaw and equally gaudy and disliked.

A walking tour of Riga took us to through the Market, made of abandoned Zepplin hangars, the Old Town, the walls of the medieval town, lots of churches being gussied up in anticipation of the Pope’s visit the following day, and a tribute to its sister city in Germany, Bremen, with the animals peering though a wall. Much of the Old Town had been bombed during WWII, so many of the buildings were restorations but it was hard to guess which ones.

There was the inevitable Freedom Monument and an Occupation Museum which I visited. In 1949, during the Soviet Occupation, over 40,000 Latvians were deported to Siberia as part of the socialization of the country. These were the wealthy farmers and intellects; their deportation was designed to encourage the remaining farmers to voluntarily give up their land to the collective good. The displays included a film about the deportees lives in the Gulag and Siberia and their return in 1955 after the death of Stalin. The museum kept referencing that the deportees made of 2.2% of the entire population of Latvia.

The outdoor memorial to the Holocaust and Riga ghetto also references numbers, 70,000 Jews killed by the Nazis, 200 existing synagogues destroyed, less than 1,000 Jews remaining in Latvia after the war. Complicity by some Latvians was acknowledged, as were efforts by other Latvians to save the Jews. A house from the ghetto, furnished as it would have been in 1941, had been moved to the memorial and numerous photos illustrated  life in the ghetto. The ghetto was just a few blocks from my hotel, but as I walked around it, there was nothing indicating its former use. There was a memorial where the Great Choral Synagogue of Riga had stood, alongside its ruins. 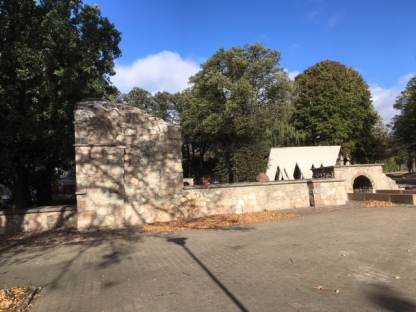 None of this was very uplifting, so I decided to see if the KGB museum would bring a smile to my face. I don’t mean to be catty, but there has been one in every former USSR city I have visited and there is a certain similarity which, given that the KGB probably used the same playbook everywhere, is entirely expected. The directions were simple- go through the market (watch out for pickpockets), cut through the Old Town, go by the Freedom Monument for 10 blocks and arrive. I carefully cradled my backpack/purse through the market, then let my guard down on the rest of the walk until I arrived at the KGB museum, looked at my backpack and discovered I had been robbed. My wallet, with about 100 Euros, my driver’s license, one of my Visa cards and my debit card (which had not been working in any event), was gone. SHIT…………….

On the plus side, I still had my passport, a Visa card (I always travel with 2) and little bits of cash stashed all over the place. I wasn’t destitute, just pissed off. I spent the next 3 hours doing what I had happily avoided for the past 2 weeks – getting a Latvian SIM card so I could cancel my Visa card and order a replacement Visa and debit cards. If I thought getting robbed was a pain, it was nothing compared to the total stupidity of CIBC card services. They are quite happy to courier a Visa card to my son, but a debit card can only be sent to me and my lack of an address does not have any impact. As for those “free” collect calls to report a stolen card, the SIM card doesn’t recognize collect calls, so after being put on hold for 35 minutes, (we appreciate your business; our first available agent will be right with you), my SIM card ran out. I think the KGB museum would have probably been more pleasant and far less bureaucratic.

Between the Holocaust memorial and the pickpocket, Latvia was leaving a bad taste in my mouth, But it had one more treat: Rundale Palace. Built by the same architect who designed the Hermitage and Summer Palace in St. Petersburg, it was Baroque all the way -over the top design with garish painted panels, gold leaf cherubs and generally, bad taste. Commissioned by a German (the Duke of Courland) but taken by Catherine the Great in 1795 and given to her favourite boy toy of the day (she had many), it was also used by Napoleon’s army in 1812. It suffered serious damage in WWI, but the Soviets, recognizing its potential commercial opportunities, restored it during their occupation. 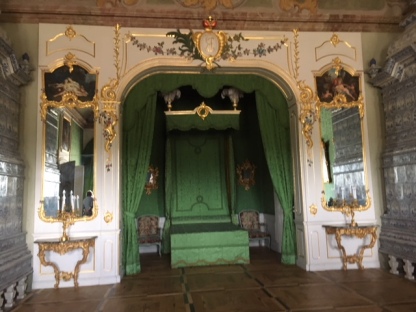 On the day we visited, it was being used for another bourgeois purpose. The BBC was filming a mini-series based on Catherine the Great starring Helen Mirren. Catherine’s death scene will be interesting if filmed-she died of a stroke on her toilet. Which seems like a fitting way to exit Latvia.